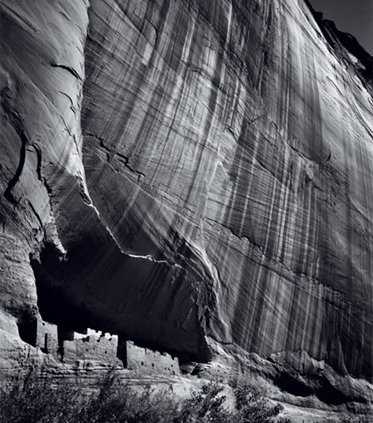 “Only when I had completed the prints [of this image] months later did I realize why the subject had a familiar aspect: I had seen the remarkable photographer made by Timothy O’Sullivan in 1873, in an album of his original prints that I once possessed. I had stood unaware in almost the same spot of the canyon floor, about the same month and day, and at nearly the same time of day that O’Sullivan must have made his exposure, almost exactly sixty-nine years earlier.” Adams’ photograph differs from O’Sullivan’s; he included a triangle of sky in the upper right corner and used a filter to darken the sky and cliffs.