What Is It? Prints, Originals, Proofs, Repros, etc.

Ansel’s career as a photographer began in 1927, although some of his works from as early as 1921 were printed or published throughout his life. He died in 1984, and never really retired from taking photographs or making prints. During that time, he worked as a commercial photographer, an educator, a publisher, a fine artist, a writer, and advocate for the environment.

During that same period, the technology of imagery advanced significantly, capturing images on glass then film, reproducing images via photogravure, half tone, two tone, tri tone, four color for magazines, news services, books, and posters. Ansel contributed to that development as well through the Zone System, and his interest in science and the ability to more accurately control the image led to many many different prints, purposes, and products. It may not be possible to comprehensively record all of the different ways we see Ansel’s images. Including how extra-terrestrial life may view Ansel’s images on Voyagers 1 and 2.

But there are a few that create confusion “in the market” that we want to clarify.

Ansel used the term “print” differently than is generally in use today. It was interchangeable with “photograph”. He called his fine art gelatin silver photographs by the terms of “exhibition print”, “fine art exhibition print”, “fine art print”, and you can substitute “photograph” for “print” in any one of these. Nowadays, we refer to the same thing generically as “original photograph”. These were prints that Ansel personally made with and for a fine art intent. 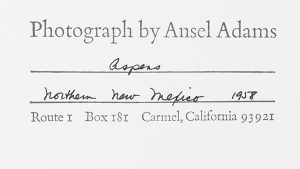 Reproduction Prints, stamped on the back of the photo or the back of the mount with a wet stamp reading “For Reproduction Only”. These were gelatin silver photos made by Ansel or an assistant for the purpose of some sort of reproduction in book, magazine, or other print form. When Ansel was alive and active, printing technologies rarely produced an accurate reproduction. Given that, Ansel would make a print for a specific technology that would be higher or lower contrast depending on how the technology would alter the image. Rarely were they made with the same tonalities and image intent as what he considered his fine art. 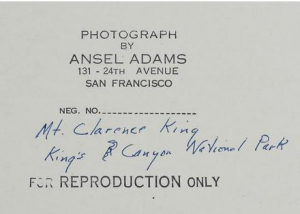 Ansel Adams “For Reproduction Only” stamp

As a working photographer, producing for assignments, projects, books, portfolios, etc., Ansel collaborated with or reported to people who would select images for their purpose. A photograph with a wet stamp of “Proof Print” was generally for this purpose – Ansel wouldn’t necessarily spend the time to create a perfect print (recall that he was a perfectionist), but to provide a conceptual idea of the image. Again, not necessarily printed by Ansel and typically not what he would consider an “exhibition print”. For more detail, click see Proof Prints in Detail.

This may seem like splitting hairs to many people, but as we are descended from Ansel, our concern is that these types of prints find their way on to the public market from time to time, and are often confused with his original fine art photographs. When the quality of the image or print are substandard to Ansel’s fine art, it negatively impacts the perception of his fine art and his artistic legacy.

These gelatin silver prints were made by one of Ansel’s assistants for sale in Best’s Studio in Yosemite.  His intention was to offer a high quality memento of a visit to Yosemite that was affordable to most visitors. He wanted people to take a bit of their inspiration home. These were signed from 1958 to 1972, initialed for 2 years, and after 1974 without Ansel’s signature or initials. The edition continues today under the moniker of “Yosemite Special Edition Photographs”. In the 1960s, Ansel created a similar program for the Grand Teton Lodge Company with a small set of 6 images. It was not a commercially successful product line for them, and was discontinued quickly. 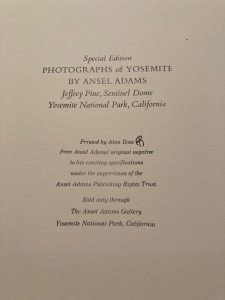 These photographs are fairly uncommon, but were essentially a precursor to the Special Edition of Photographs. They were loose prints, meaning unmounted, usually sold in a heavy envelope with a “Best’s Studio / Operated by Virginia and Ansel Adams” stamp. The prints themselves were unsigned and unstamped. They were typically printed by an employee of Best’s Studio, and not considered original photographs.

In the 1980s, new technological processes allowed for high quality offset lithographic printing of posters. When the new posters were introduced, there was a short run (350) on special paper that Ansel then signed. There were three images produced this way before Ansel passed away, there were additional images in process that made it to market without his signature. 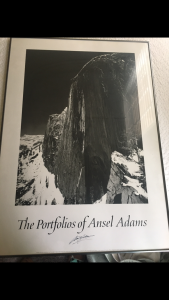 Ansel and Virginia self-published books, notecards, and postcards over the years. People would often cut pictures out of books to overmat and frame, and often did the same with notecards and postcards. When the calendars came along in 1980, the same thing occurred. Over time, and particularly as the quality of reproduction improved, companies, including Ansel and Virginia’s publishing arm, did it commercially, overmatting various types of reproductions.

Modern Replicas are highly accurate reproductions of original Ansel Adams photographs. This use of modern technology for both image capture and image reproduction allows us (The Ansel Adams Gallery) to provide outstanding examples of Ansel’s body of work to a broad audience.