Visions of Taos: The Making of “Taos Pueblo” by Ansel Adams and Mary Austin

When Ansel Adams traveled to New Mexico for his fourth time in April 1929, the majesty of the desert had already started to ingrain itself deep in his soul. During this particular trip, Ansel began to develop a lasting and very rewarding collaboration with feminist writer and bohemian Mary Austin. The artistic duet between Ansel and Mary in this particular case spawned the creation of “Taos Pueblo,” an exceptional project at the intersection of their two careers as photographer and writer. 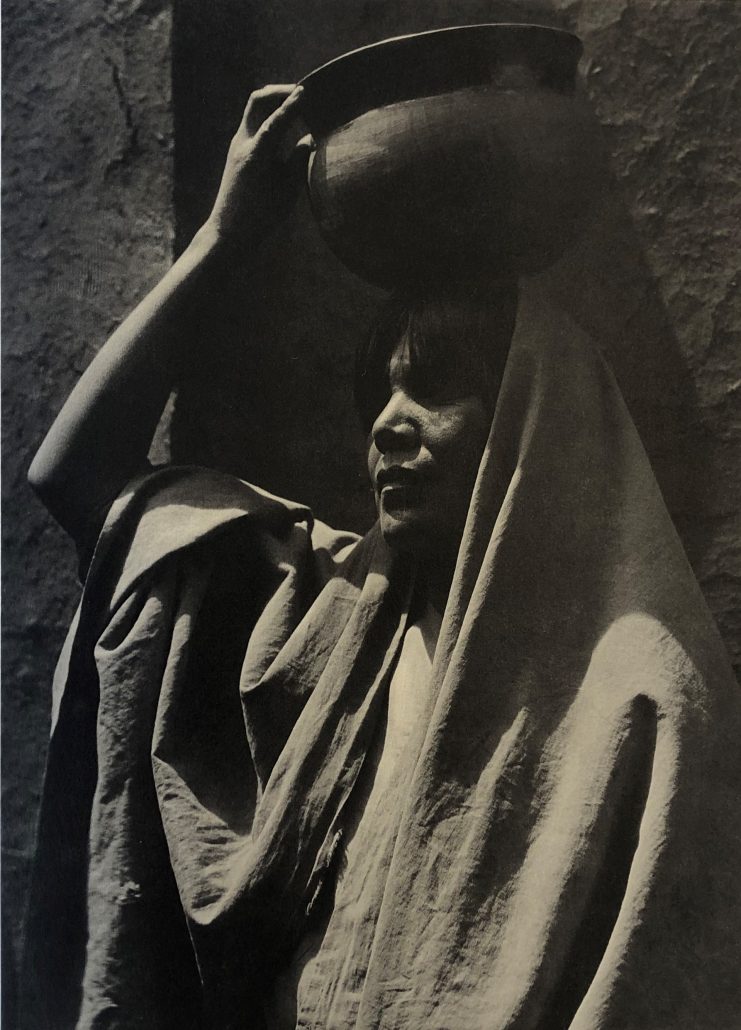 When Ansel arrived in New Mexico in April 1929, he wrote a letter to his father to describe the impact of the desert and his partnership with Mary Austin on his spirits and career trajectory:

“Today there is thick black sky and snow is falling in the hills. Tomorrow it may be a crystal clear day; the changes of the weather are always startling…Mary Austin gets back in a day or so. We are enjoying every minute of the time, and the people are all so good to us that we feel quite at home. There is an unfolding a perspective of work that seems much, much more than I had ever hoped for…I am certain that New Mexico will keep me half a year at least [in the future] and I shall meet with a great success. The wealth of material is beyond belief.” — Ansel Adams letter to Charles Adams, New Mexico, April 4, 1929 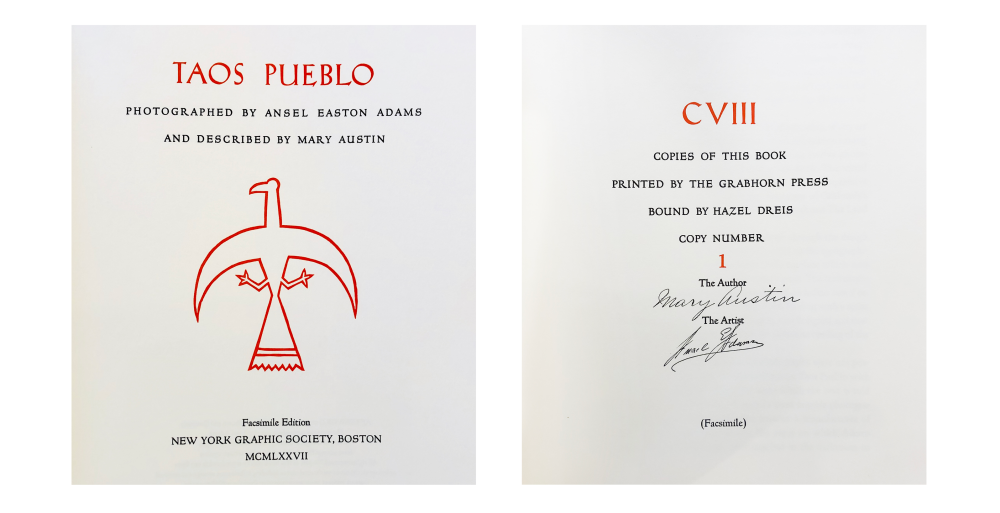 Ansel and Mary decided upon the subject of the Pueblo of Taos for their creative collaboration. Their dream came to fruition with the help of friend Tony Lujan, a Taos Indian, whose wife Mabel, heiress and patron of the arts, hosted Ansel and Mary at her home in Los Gallos, Taos. Tony Lujan approached the Governor of Taos, who in turn held a Council Meeting, and the following day granted Ansel permission to photograph the Pueblo. Ansel was thrilled to begin this project, greatly inspired by the stunning subject matter of “great pile[s] of adobe five stories high with the Taos peaks rising a tremendous way behind. And the Indians [so] majestic, wearing as they do their blankets as Arabs.” (Ansel Adams, Letters 1916-1984) 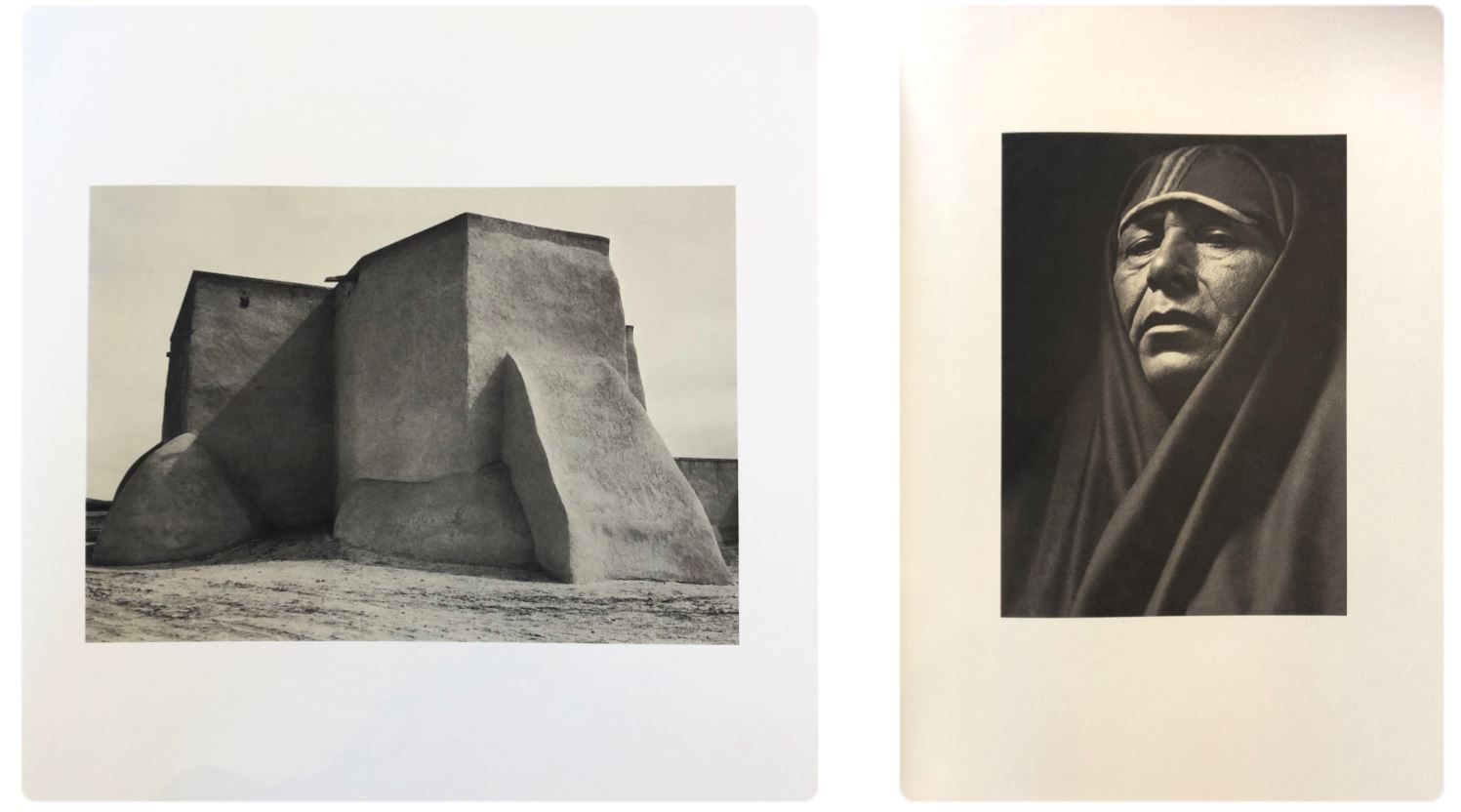 Ansel’s awe of the Taos landscape, architecture and culture translated directly into the impressive photographs he made for “Taos Pueblo.” His enthusiasm was wild, resounding with excitement and wonder. In a letter to his best friend Cedric Wright from where he was staying at Mabel’s home in Los Gallos, Ansel wrote: 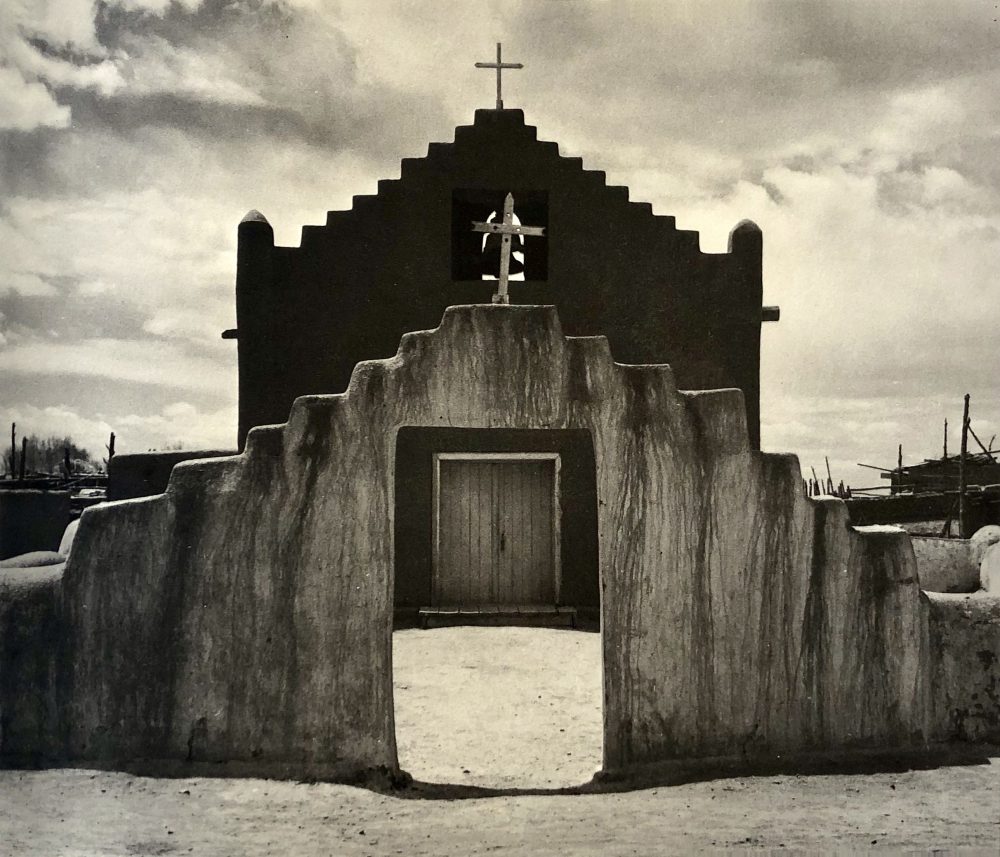 Thus the “Taos Pueblo” project began, sparked by the good will of friendship, the enchantment of the region, and a shared sense of dedication to produce something truly remarkable. And remarkable, it was. “Taos Pueblo” was produced in 1930 in a small edition of 100 signed and numbered copies, plus eight artist’s copies, each containing twelve original prints. Ansel published this exceedingly rare book with Grabhorn Press in San Francisco. The folio is hand bound in original quarter tan morocco over orange buckram by Hazel Dreis. Ansel’s contribution to the work includes twelve original silver bromide prints which were hand printed by the artist himself on rag paper specially sensitized with emulsions by William Dassonville, his friend and San Francisco paper supplier. The manuscript pages were enhanced with a striking graphic motif by Italian-American printmaker illustrator and author, Angelo Valenti. 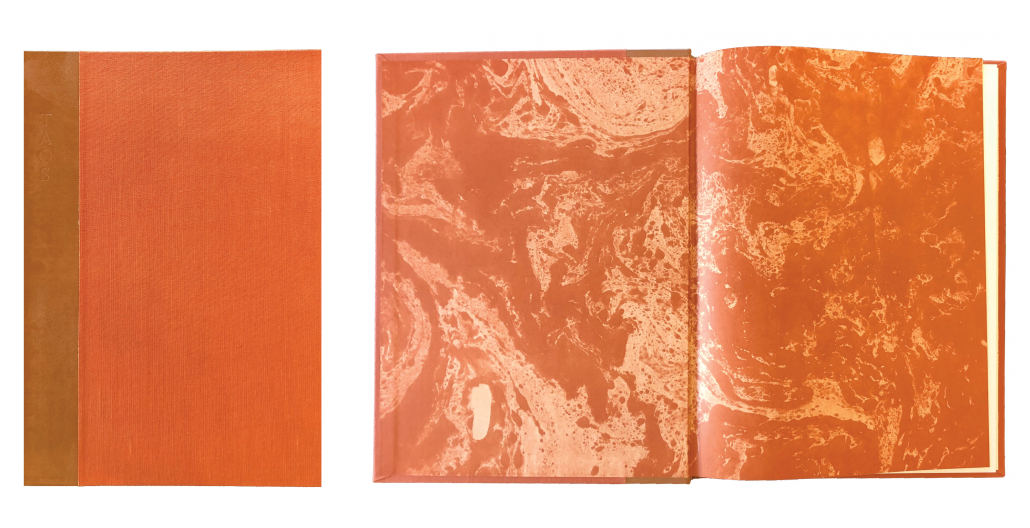 Over a period of several months during the fall of 1929, Ansel manually produced 1,296 silver prints for the book edition. The quality and care put into the publication of “Taos Pueblo” along with its marking of the development of Ansel’s style makes it a breathtaking, sentimental masterpiece. 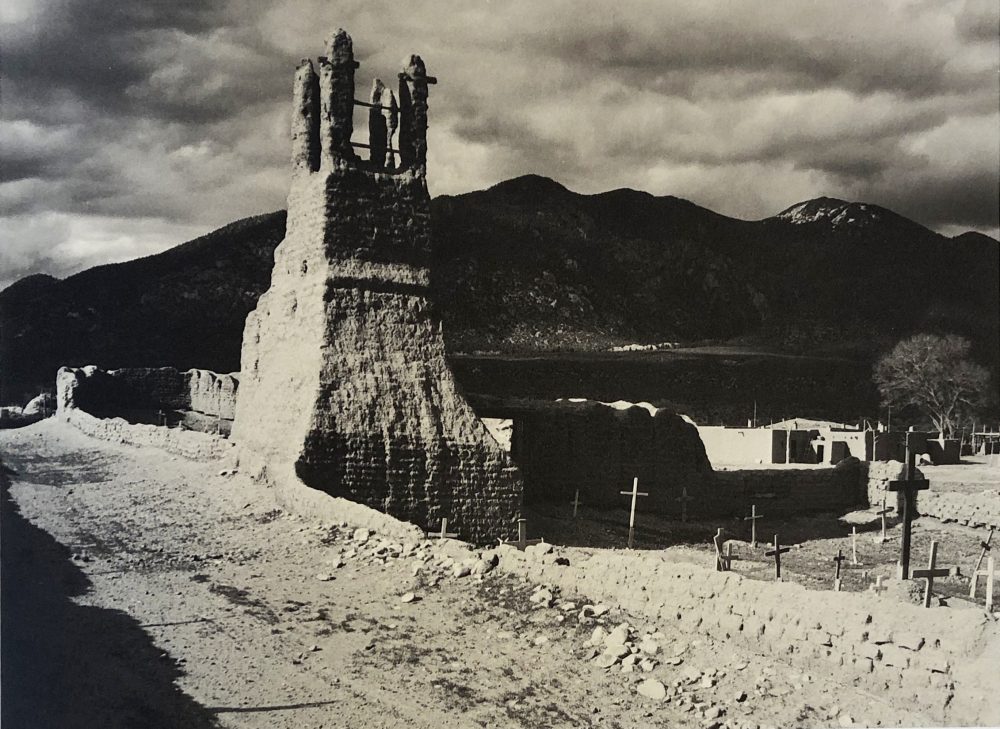 In 1977, the New York Graphic Society published a facsimile edition of the original, with the cooperation of Ansel. The society used gravure prints rather than original photographs, and produced a limited edition of 950 copies, each signed by Ansel. Following the release of that edition, photographic historian Weston Naef wrote:

“With Taos Pueblo we see a commitment to light and form as the essential building blocks of a picture. Every exposure was made in the most brilliant sunshine which in turn created deep shadows. Sunlight and shadow are at the same time the photographer’s friend and foe. Neither films nor papers can record the two extremes of bright sun and deep shadow equally well, and an unhappy tonal compromise is often the result. Rich shadow detail is here realized simultaneously with delicate highlights in a way that proves Adams’s native sense for the toughest technical problems of the medium, and how to solve them.” — Weston J. Naef, The Metropolitan Museum Art 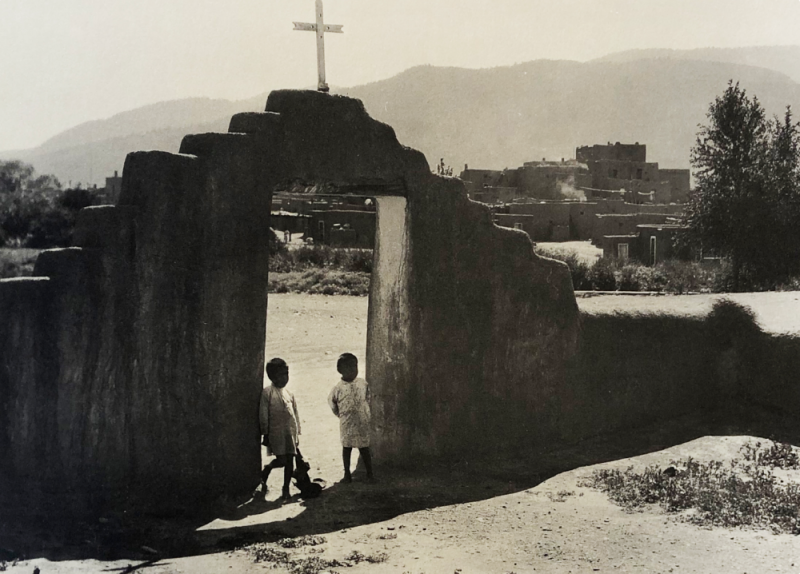 A seminal work in Ansel’s career, and a landmark photography book, “Taos Pueblo” is considered by many to be the greatest pictorial representation of the American West. With the publication of “Taos Pueblo,” Ansel launched his career as arguably the greatest landscape photographer of our time.

Learn more about the life of Ansel Adams, leading up to and following his publication of “Taos Pueblo.” View the complete set of twelve photographs made by Ansel for “Taos Pueblo” listed by the Two Red Roses Foundation, a private, non-profit educational institution that promotes an understanding of the American Arts & Crafts movement.