Virginia Best Adams: The Woman Behind The Legend 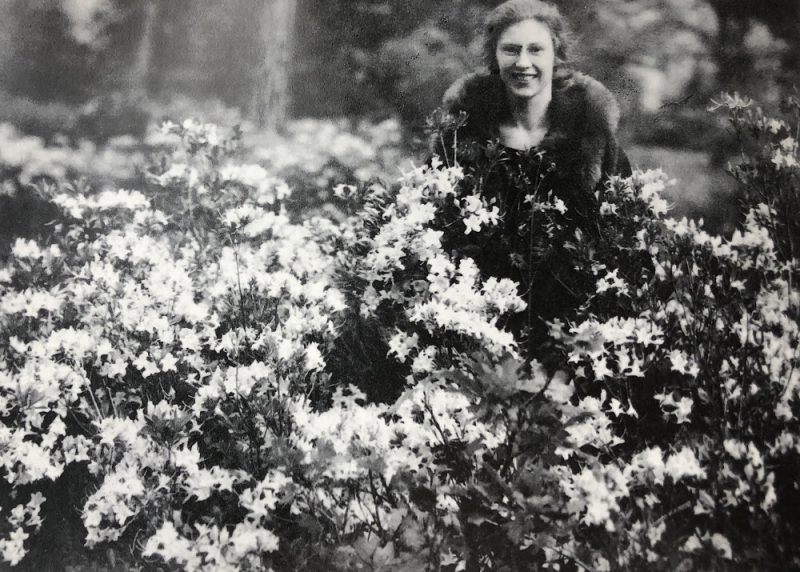 Virginia Best and Ansel Adams met in Yosemite in 1921. It was during one of Ansel’s first summers in the park, and as an enthusiastic young musician at the time, his time in the mountains posed a dilemma: where to practice his music? If Ansel wanted to fulfill his dreams of becoming a concert pianist, taking a three-month hiatus every summer would not do. As fortune would have it, that summer Ansel was introduced to Harry Best, the owner of Best’s Studio, who kindly allowed him to practice on his old Chickering square piano. Ansel Hall, the first naturalist of the National Park System, made the introduction, and his son Roger is still great friends with Michael and Jeanne Adams, Ansel Adams’ son 100 years later.

Harry Best had a seventeen-year-old daughter named Virginia, who had a beautiful contralto voice and thought about planning a career as a classical singer. Ansel became enamored with more than just the Chickering piano when he began spending his time practicing in Virginia’s company. In his autobiography Ansel recalls: “We found considerable mutual interests in music, in Yosemite, and it turned out, in each other.” 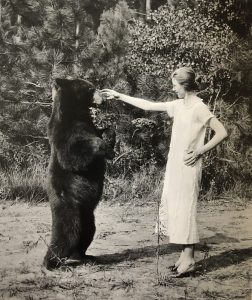 Having spent most of summers of her childhood in Yosemite, Virginia knew the landscape well and shared her knowledge of its wonders with Ansel. The two spent more and more time together, and shared a reverence for both the grandeur and delicacy of the natural world all around them. As Yosemite underwent the ever-growing commercialization we see to this day, Virginia and Ansel confided in one another their dismay for development at the cost of the degradation of their beloved wild spaces. Said Ansel, “From the first years of friendship, I felt a rightness about the two of us. We were comfortable together.”

In the winter of 1927, Ansel arrived to celebrate the New Year of 1928 with Virginia. It was then, after six years off and on of courting, that Ansel officially proposed and Virginia accepted. The two had gone back and forth on their engagement; exchanging letters and visits all the while. Ansel wanted to be more sure of his career before an official wedding celebration, and thought they were too young to be taken seriously. On January 2, 1928, just three days after the proposal, they were married at Best’s Studio in Yosemite Valley with family and close friends. Ansel recalled the night:

“Virginia did not have time to buy a wedding dress and so she wore her best dress, which happened to be black. With perhaps a trace of scorn for tradition, along with a coat and tie, I wore knickers and my trusty basketball shoes.” 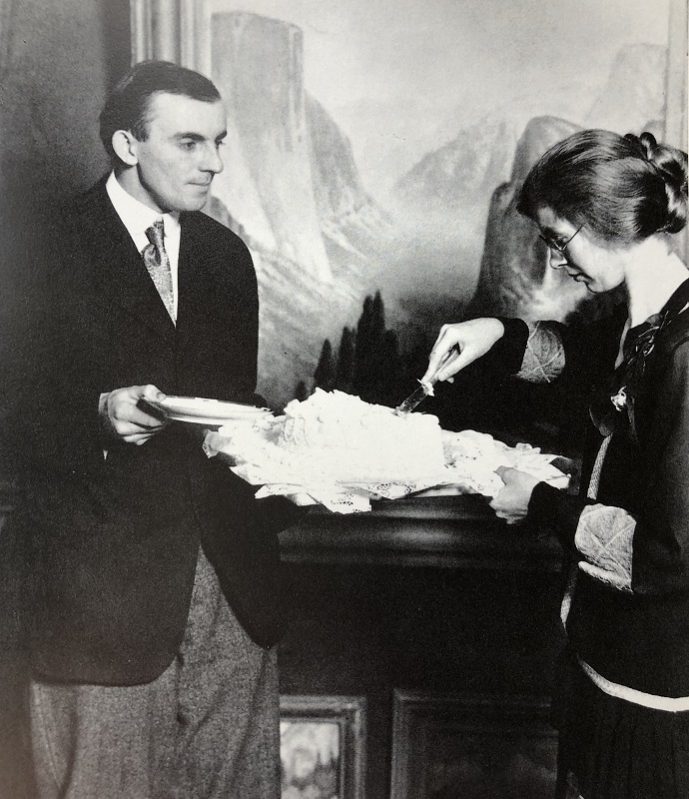 The events of the evening made for quite an adventurous wedding night. First, while he was putting chains on Harry Best’s Dodge—loaned as the honeymoon getaway car—best friend and best man Cedric Wright lost the ring Ansel’s parents had entrusted to his care. He found it in the slush under the car just in time for the ceremony. Next, Virginia, Ansel, Cedric and friend Ernst Bacon headed out of Yosemite Valley towards Berkeley, when on their way they had a flat tire. The jack would not fit under the car so they had to uproot a nearby mailbox post to use as a lever. Wrote Ansel, “The tire was exchanged, the mailbox post set back in its hole, and we continued on to Berkeley, arriving at Cedric’s unheated home at midnight. Our bed was a roll-away, but we were so weary that it made no difference to us that night.”

After their marriage, Ansel’s career—which had shifted to photography—began to take off. It was through Virginia that Yosemite became a constant in his life, a place he eventually made famous through his photographs of Half Dome, Yosemite Valley, Merced River. At the time, the only residents of Yosemite were expected to be employed there, making a livelihood, or the family members of those who were doing so. Thus, Ansel’s rather constant presence was legitimate. It also afforded him opportunities of access in all times of day and night and all seasons—essential for really knowing a place. 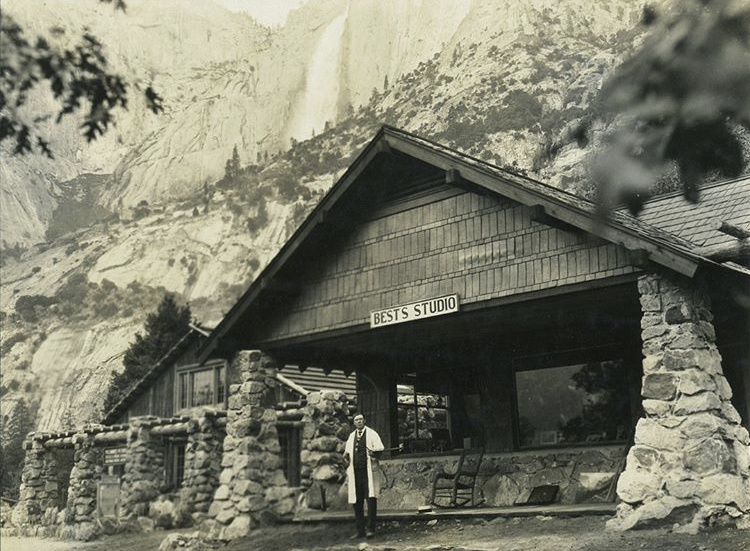 Harry Best in front of Best’s Studio in Yosemite National Park, which still stands today as The Ansel Adams Gallery

It was 1936 when Virginia’s father suddenly passed. She inherited Best’s Studio, and for 36 years, ran what is now The Ansel Adams Gallery. In the process of running the family business, Virginia helped give her husband the wherewithal for him to do his photographic work. Virginia and Ansel wanted to sell high quality merchandise rather than stocking cheap curios as Yosemite souvenirs. It was through this new business model that the gallery began selling a series of Ansel Adams photographs called “special edition prints.” Sales of these prints, as well as profits from Southwestern jewelry, handcrafts, rugs and ceramics, provided a steady income so that Ansel might travel to pursue his photography. Virginia accompanied Ansel on a good deal of his travels, especially traveling to the Southwest to establish lasting partnerships with Indian traders and artisans whose work she represented and sold. 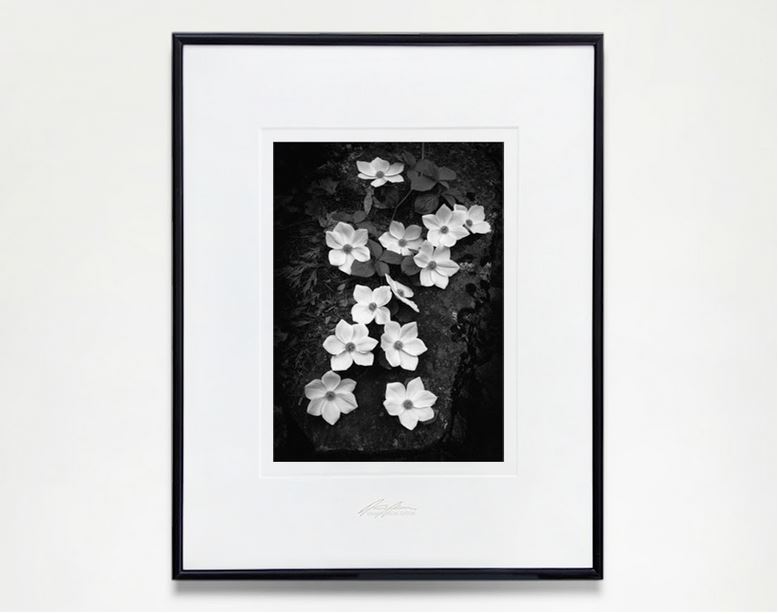 Virginia’s hard work supported both her growing family, which included son Michael and daughter Anne, and also financed the publication of two of her husband’s books, “My Camera in the National Park,” and “My Camera in Yosemite.” She was also gracious, and with a knack for entertaining visitors and making them feel welcome, Virginia nurtured a community that surrounded The Ansel Adams Gallery. The studio was a fun hub of cultural activity in Yosemite Valley, bringing together mountaineer friends, artists, and musicians who were talented and loved to party together. Virginia and Ansel’s children, Michael and Anne, would sometimes sneak down and sit out of view on the stairs and listen to music and happy friends late at night.

Life then was pretty slow. Virginia had some bells on the front door that alerted her that someone had entered the studio while she was at home upstairs. She would give them 10 or 15 minutes to see what was there and then she’d go down and help them out. Jeanne Adams remembers their family at the dining room table having lunch and strangers coming up and through the house to use the bathroom. The space was friendly, simple, primitive, and invited people in as there were not many services available to the visitor at that time. One of the distinguishing features of Virginia and Ansel’s life in Yosemite was their inclusiveness, that regardless of possible frictions between “company” and “government,” Best’s Studio and the hospital were always friendly and easy places to be and socialize. 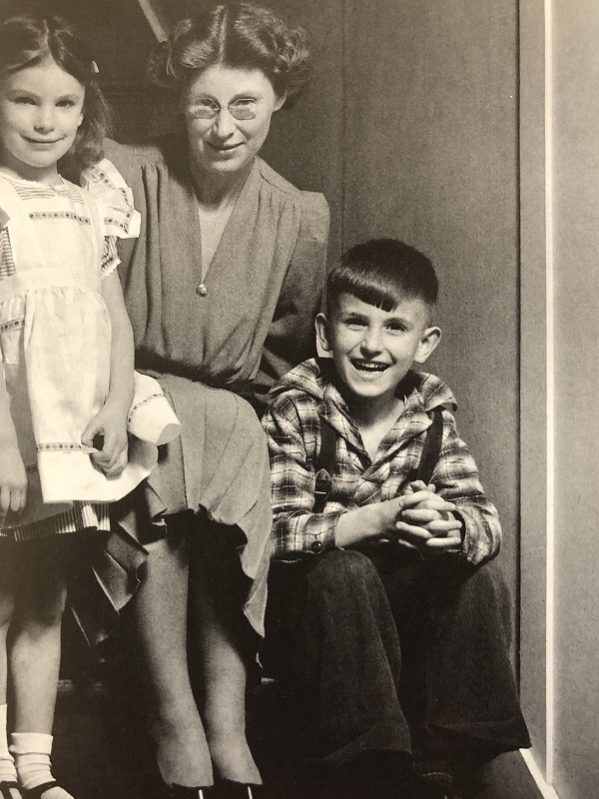 For the most part, Virginia was content to be in the background. A bit camera shy and according to an article in the LA Times, “not generally at ease with reporters,” she once summed up her contribution by saying simply, “I guess I’m the one who just tried to keep things going.” But Virginia did more than that—she nurtured a space with undeniable goodwill, one that still celebrates the arts and the environment in the heart of Yosemite, and which is enjoying its 117th year in operation.

Beyond The Ansel Adams Gallery, Virginia was an active environmentalist and served on the board of directors of the Sierra Club from 1931-33 when her son Michael was born. Then, Ansel ran for the board member seat and won and continued for decades. Virginia was also a Trustee of the Yosemite Natural History Association, and a mountaineer. She has been credited with making the first ascent by a woman of a route on Mt. Whitney in the Kaweah area in what is now Sequoia National Park. It is with Virginia’s guidance and roots in Yosemite, steadfast care for the family business, and lifetime support of Ansel’s work that we have grown to know so well and love Yosemite National Park and the American West. 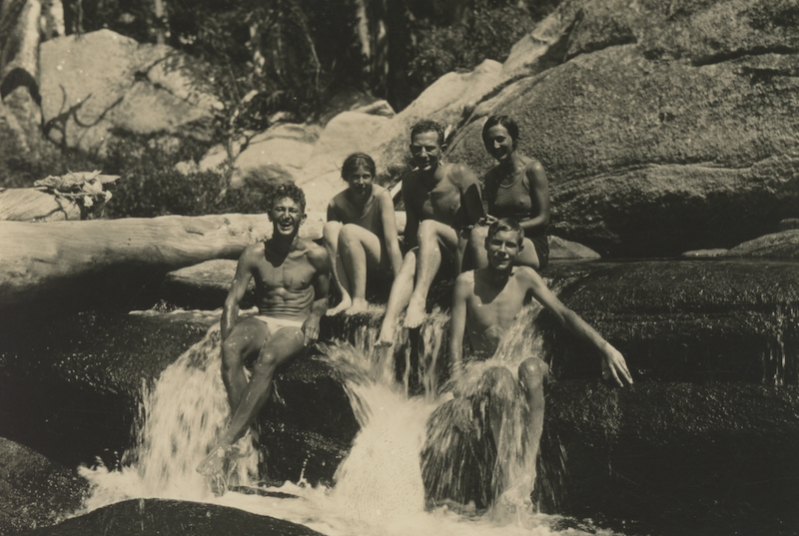 Virginia (second from the left) with friends during a Sierra Club Outing. Courtesy of the Adams Family memorabilia archives.