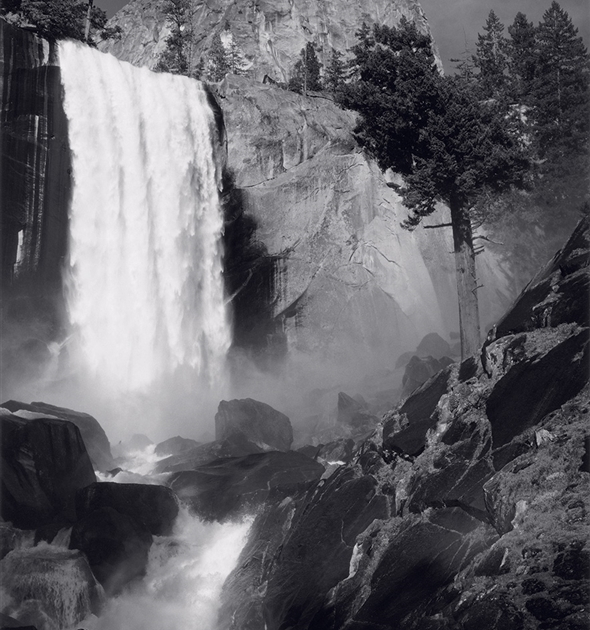 Vernal Fall, ca 1948 by Ansel Adams is available both as a Modern Replica and Yosemite Special Edition Photograph

Though Vernal Fall stands only 317 feet tall, it’s among the most powerful waterfalls in Yosemite. Like Nevada Fall, it’s one of the park’s few waterfalls that cannot be viewed by car from the valley floor. Instead, to feel the mist flowing off its thundering waters, intrepid travelers must hike to its base. One of the prime viewing spots for this majestic waterfall is the Mist Trail, aptly named for its access to both powerful falls, and for the damp air that rolls from the base of the falls to soak passing hikers.

Many visitors to Yosemite have been captivated by the fall’s grace and power. As John Muir, legendary conservationist and founder of the Sierra Club, wrote in his book The Yosemite, Vernal Fall is “a staid, orderly, graceful, easy-going fall, proper and exact in every movement and gesture… watch its waters, calmly bending over the brow of the precipice, in a sheet eighty feet wide, changing in color from green to purplish gray and white until dashed on a boulder.” This true natural wonder is often crowned by rainbows, which are naturally created by the prismatic effect of the mists in sunlight, especially in late April and early May, where the spring ice melts fill the fall to its brim.

This dramatic image, which Ansel made around 1948, showcases the exact combination of raw power and control that so fascinated Muir. Though the image is remarkable for how it captures the speed and force of the water, it’s perhaps more so for the delicacy with which it portrays the fine mist that seems to creep over the rocks at the Fall’s base. The artistry Ansel displays in this image is doubly impressive, knowing how quickly he would have had to work to avoid soaking both photographer and equipment from his damp vantage point on the Mist Trail. By 1948, Ansel had already develop his visionary Zone System, and it’s very likely that the system helped him quickly establish the important areas of visual contrast that define the mood and spirit of this photograph.

Even over his decades-long career, Ansel Adams would return again and again to this photograph, which he considered an example of some of his finest work. Perhaps inspired by Muir, he selected this image to appear in his “Portfolio IV: What Majestic Word,” published in 1963 for the benefit of the Sierra Club. Despite the image’s impressive technical artistry, it’s particularly affecting for the way it captures the mystery and magic of Yosemite, which was often Ansel’s greatest artistic inspiration. As Ansel wrote in his introduction to Portfolio III, “Yosemite Valley, to me, is always a sunrise, a glitter of green and golden wonder in a vast edifice of stone and space. I know of no sculpture, painting, or music that exceeds the compelling spiritual command of the soaring shape of granite cliff and dome, of patine of light on rock and forest, and of the thunder and whispering of the falling, flowing waters.” In this image, you can hear the thunder and whispering of Vernal Fall beckoning you to explore the park that Ansel so loved. 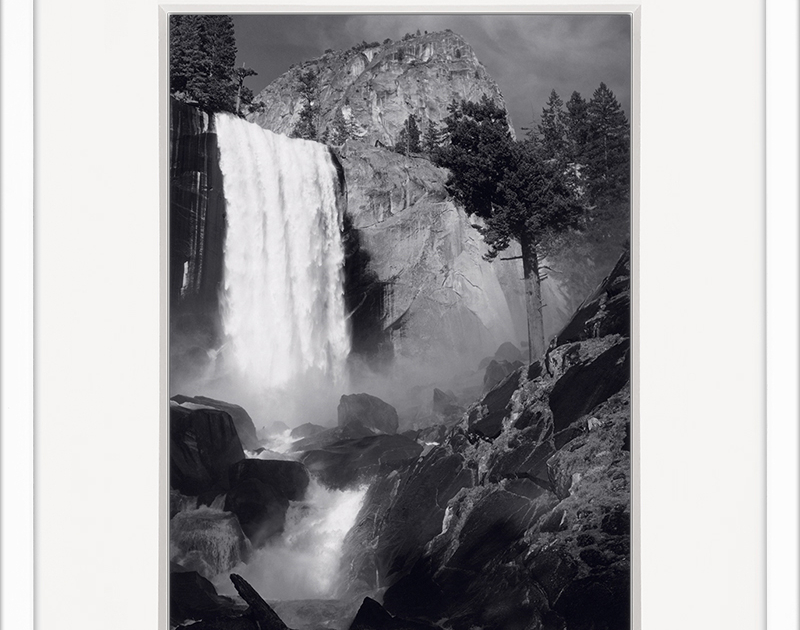