Few images speak to the power and volatility of nature more persuasively than a magnificent thunderstorm. Thunderstorm, Yosemite Valley is one such image. During springtime in Yosemite Valley, when Bridalveil fall is at its fullest, storms rip through the park with a ferocity that reminds even the most jaded visitor of the land’s enduring wildness. This iconic Ansel Adams photograph documents not just the fierce beauty of a looming thunderstorm, but one of Yosemite National Park’s most beloved vistas, the classic Tunnel View. This unique granite esplanade provides a keyhole view of Half Dome framed on either side by rugged El Capitan on the left, and Bridalveil Fall and the Three Graces on the right. 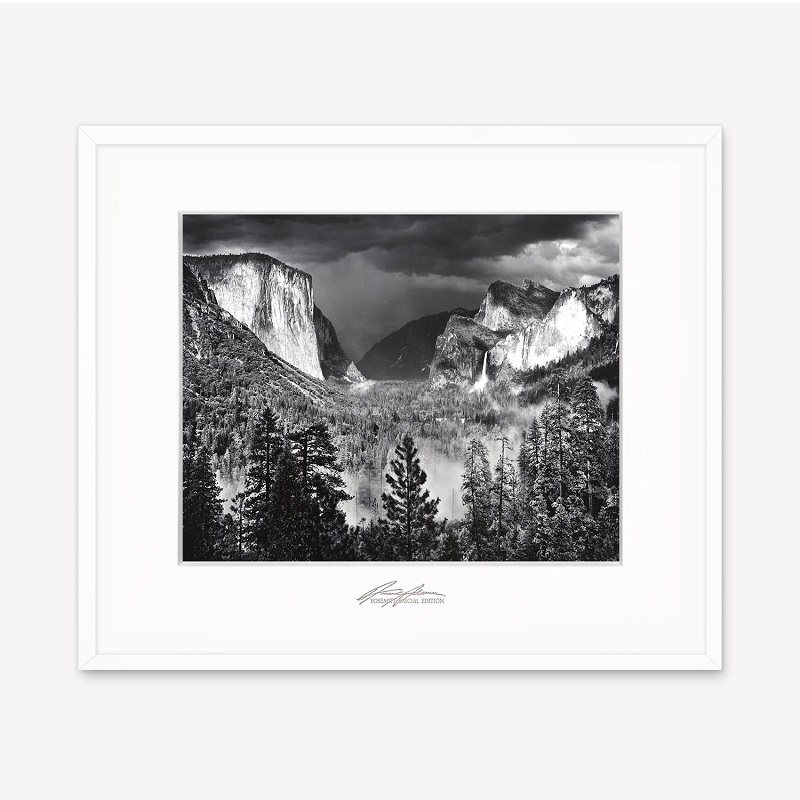 In this stunning image, we see the promise of the viewpoint in all its glory. Ansel made this image in 1949, using an 8 x 10” view camera and Kodak’s Pan-X film. To increase the contrast and show off the ethereal beauty of the rain-soaked forest in the valley below, he used a yellow filter, which darkened the sky and intensified the steely, galvanized clouds. He chose it as one of his Special Edition Prints, which he began selling to park visitors as a high-quality memento of the joys of visiting Yosemite Valley. Contemplating this photograph, you see Yosemite as Ansel did—as a source of endless adventure and artistic inspiration. Ansel himself once wrote, “Yosemite Valley, to me, is always a sunrise, a glitter of green and golden wonder in a vast edifice of stone and space.” Though “Thunderstorm, Yosemite Valley” demonstrates that the weather in the valley is not always blue skies, it nonetheless shows the beauty that can be found in every visit to the park. Seen from Tunnel View, the park seems to beckon to all who visit in search of their own inspiration. It’s fitting, therefore, that this is one of the most photographed natural vistas in the world, visited by thousands of amateur and professional photographers every year. As the local bureau of tourism puts it, it’s “the view that Ansel Adams made famous.” Looking at this spectacular photograph, it’s easy to see why.