“I Am Indeed Proud to Have the Opportunity to Present These Memoranda”: The Environmentalist Photographer Meets the Conservation President

Together, Mr. President, I am certain we can indeed do this one right the first time! – Ansel Adams to Jimmy Carter, November 6, 1979.[1]

While legendary photographer Ansel Adams is best known for his dramatic landscapes, he made images in many genres, including portraiture. On November 5-6, 1979, President Jimmy Carter, First Lady Rosalynn Carter, and Vice President Walter Mondale had portraits made by Adams for the National Portrait Gallery, and today they are part of that collection. 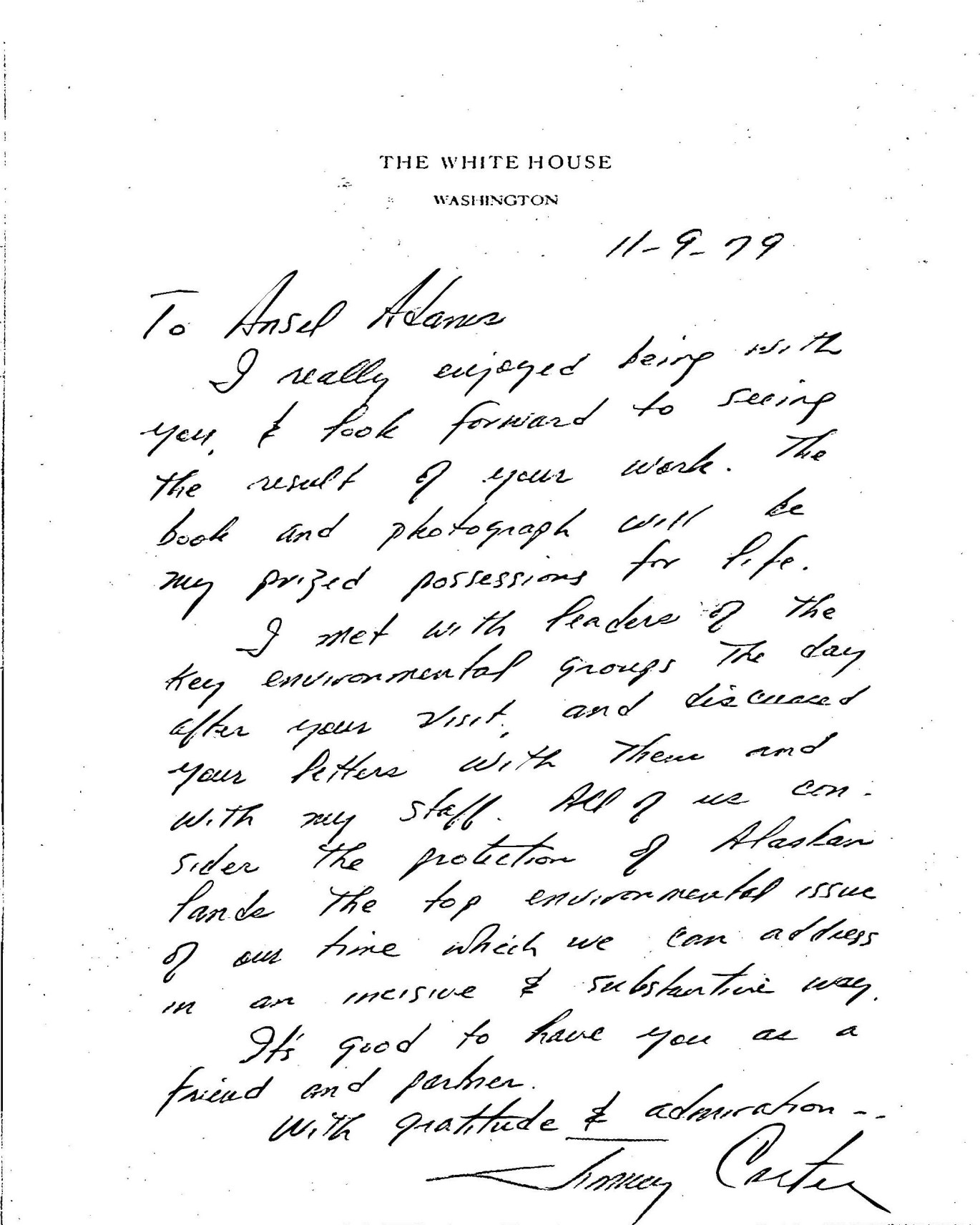 It’s unclear whose idea it was to have official portraits made that were photographs, but most likely it was Second Lady Joan Mondale’s. Joan, whose passionate advocacy for the arts resulted in the nickname “Joan of Art,” was on the board of the National Portrait Gallery and planned to include them in an exhibit.[2] Yet a Washington Post article indicates that President Carter wanted to do it “to cut costs and symbolize frugality.”[3] And a letter from Andrea Turnage, Ansel Adams’ assistant, indicates Mary Ann Tighe, deputy chair of the National Endowment for the Arts and Vice President Mondale’s arts adviser, may also have been involved in the decision. 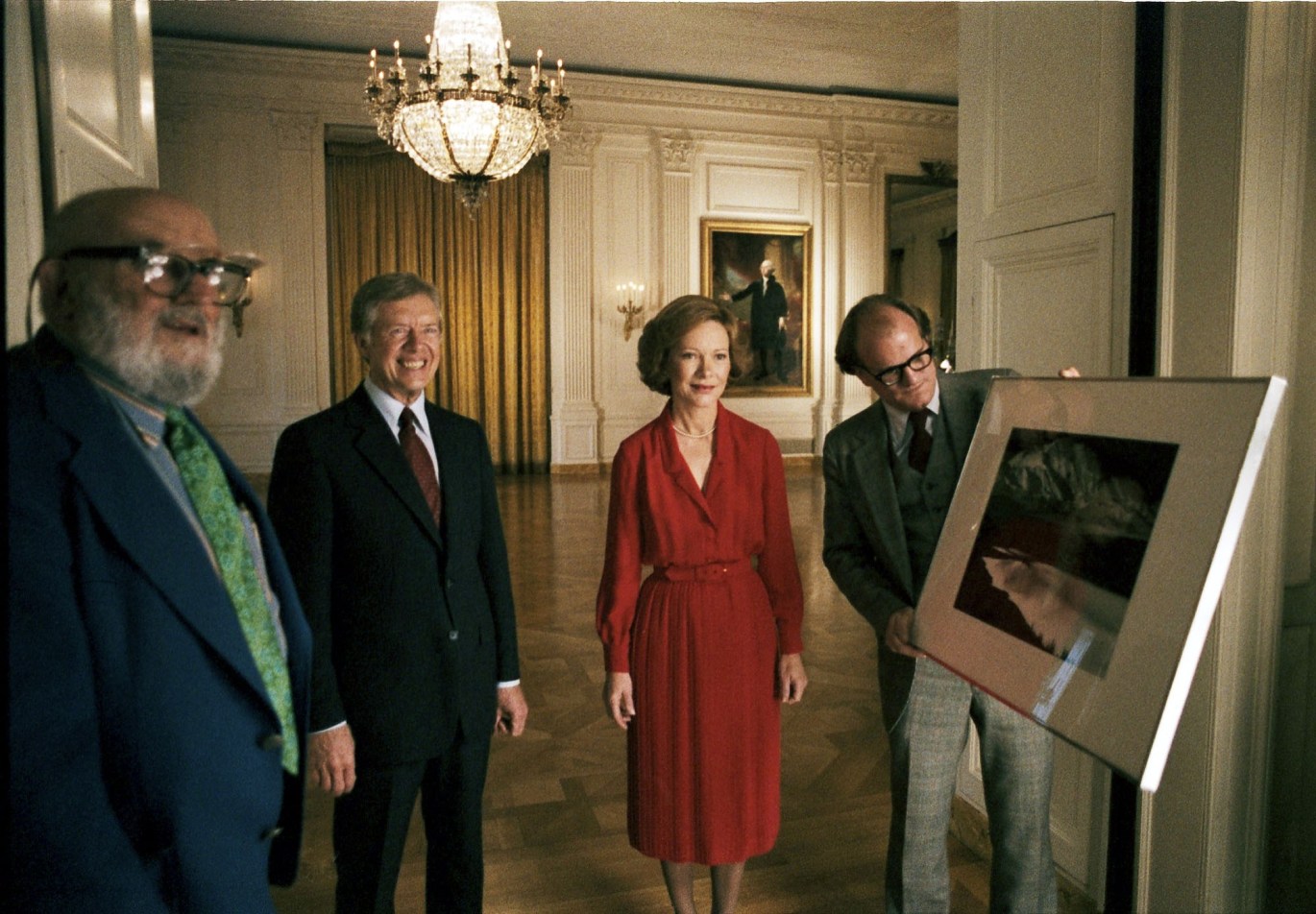 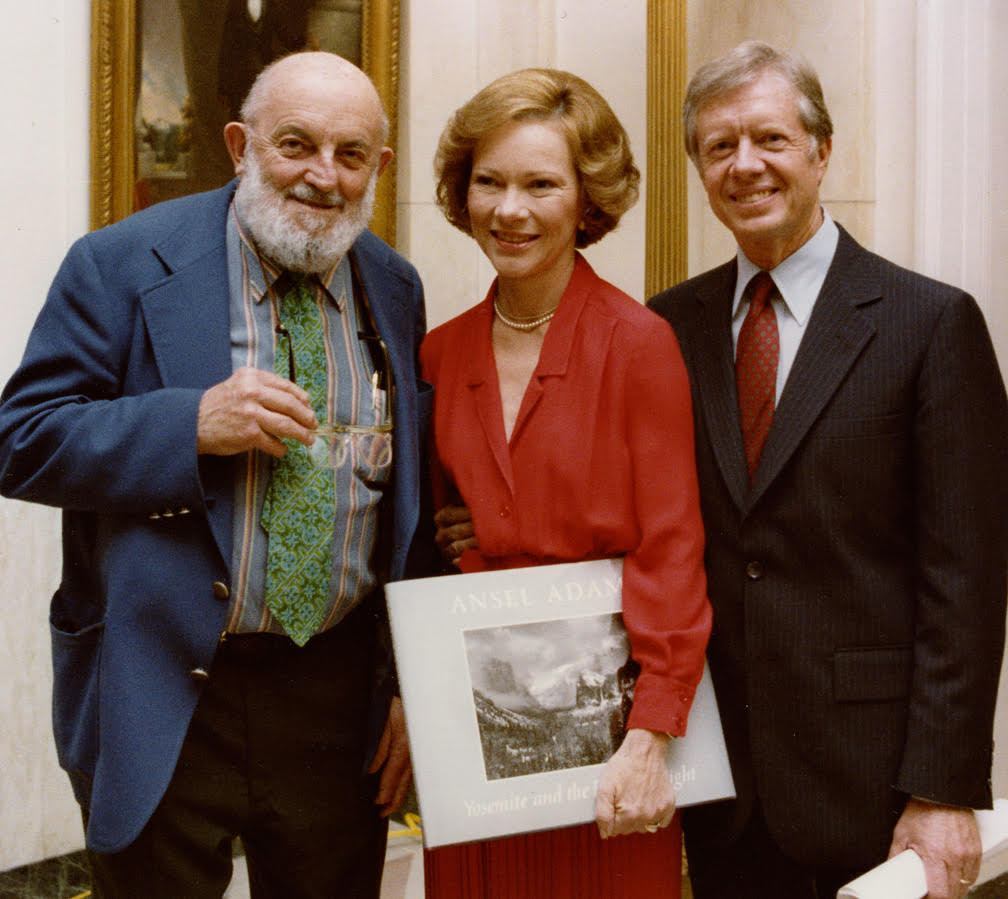 Photographer John Sexton, who was one of Adams’ assistants during the portrait sessions, recently recalled Ansel’s ideas for the shoot in a newsletter article:

“Ansel wanted to approach the making of the portraits in a bigger than life fashion. He contacted John McCann at Polaroid Corporation and asked if he could use the massive Polaroid 20×24 Land camera for the project. John McCann thought this was a splendid idea and agreed to provide not only camera and film, but also a team of skilled individuals to assist with the operation of the camera. In addition to the large Polaroid camera, we packed up Ansel’s 4×5 Horseman view camera along with the necessary lenses and other equipment he would need.”[4]

The camera was not the only thing that was massive; the amount of equipment was quite extensive. 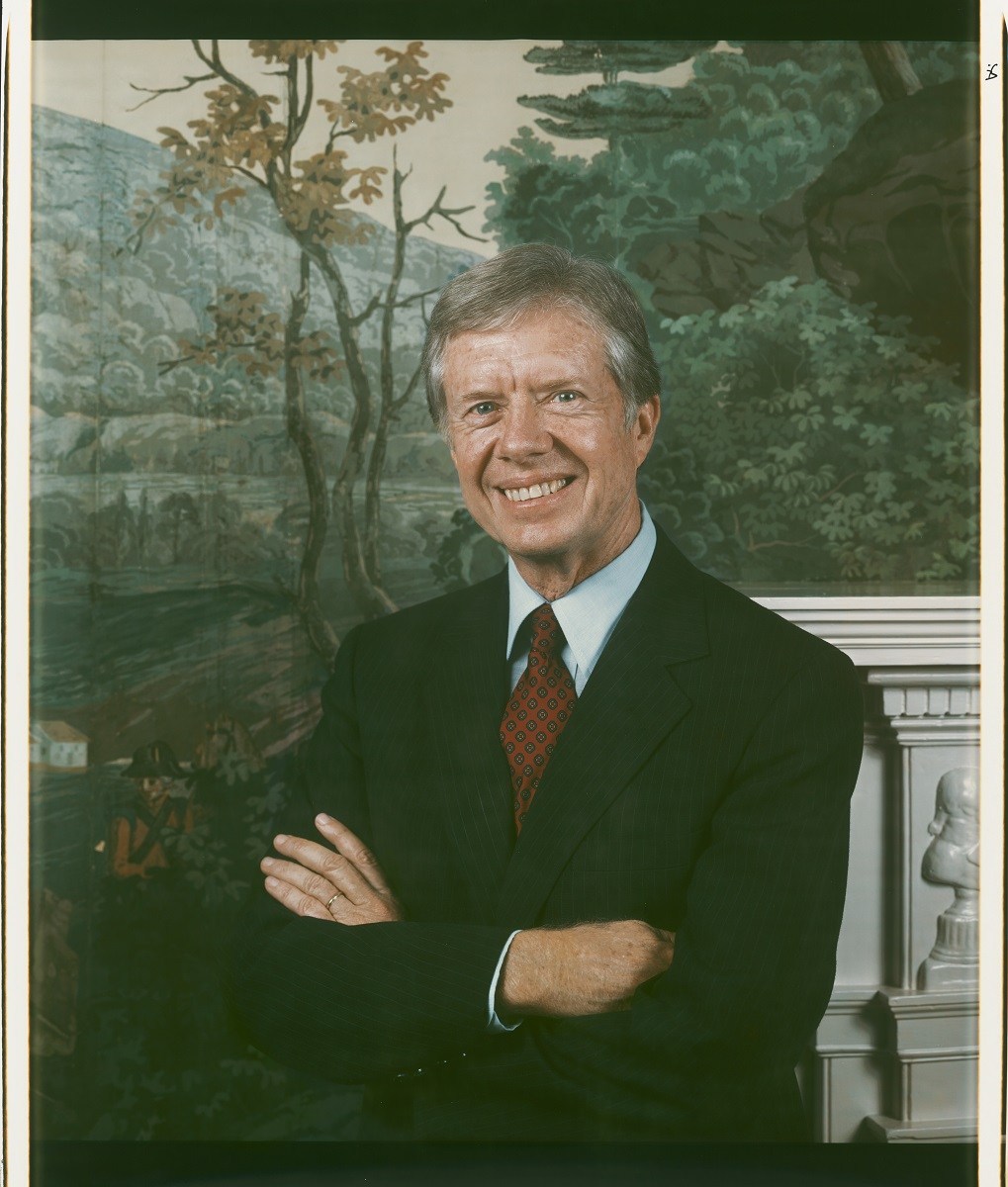 Mondale’s portrait was shot on November 5, and Washington Post reporter Tom Zito captured the scene in an article. Upon encountering the huge camera, Mondale quipped, “Well, I guess this is a big enough camera to capture the egos in this town.”[5]

In Adams’ account of the Mondale session in his autobiography, he wrote,

“He was most cordial and patient; I could not have asked for better cooperation. We had a little difficulty adjusting the 30-inch lens, and the Vice President utilized the delay by working on papers on the dining room table. … I developed great respect and a sense of friendship with the Mondales.”[6]

“At one point I was not succeeding verbally in correctly (placing) the President, so I walked up to him and gently pressed his shoulders into a more agreeable angle to the camera. Suddenly, a firm, stern hand rested on my shoulder; I did not realize that it is taboo to touch the President, and the Secret Service man was very alert … it was cause for genial laughter from all.”[7]

John Sexton remembered they had to use a “special black lacquered box that was built by White House staff overnight for President Carter to stand on to avoid an ‘awkward’ alignment of the President’s shoulder with the fireplace mantle.”[8]… read the full article at the National Archives 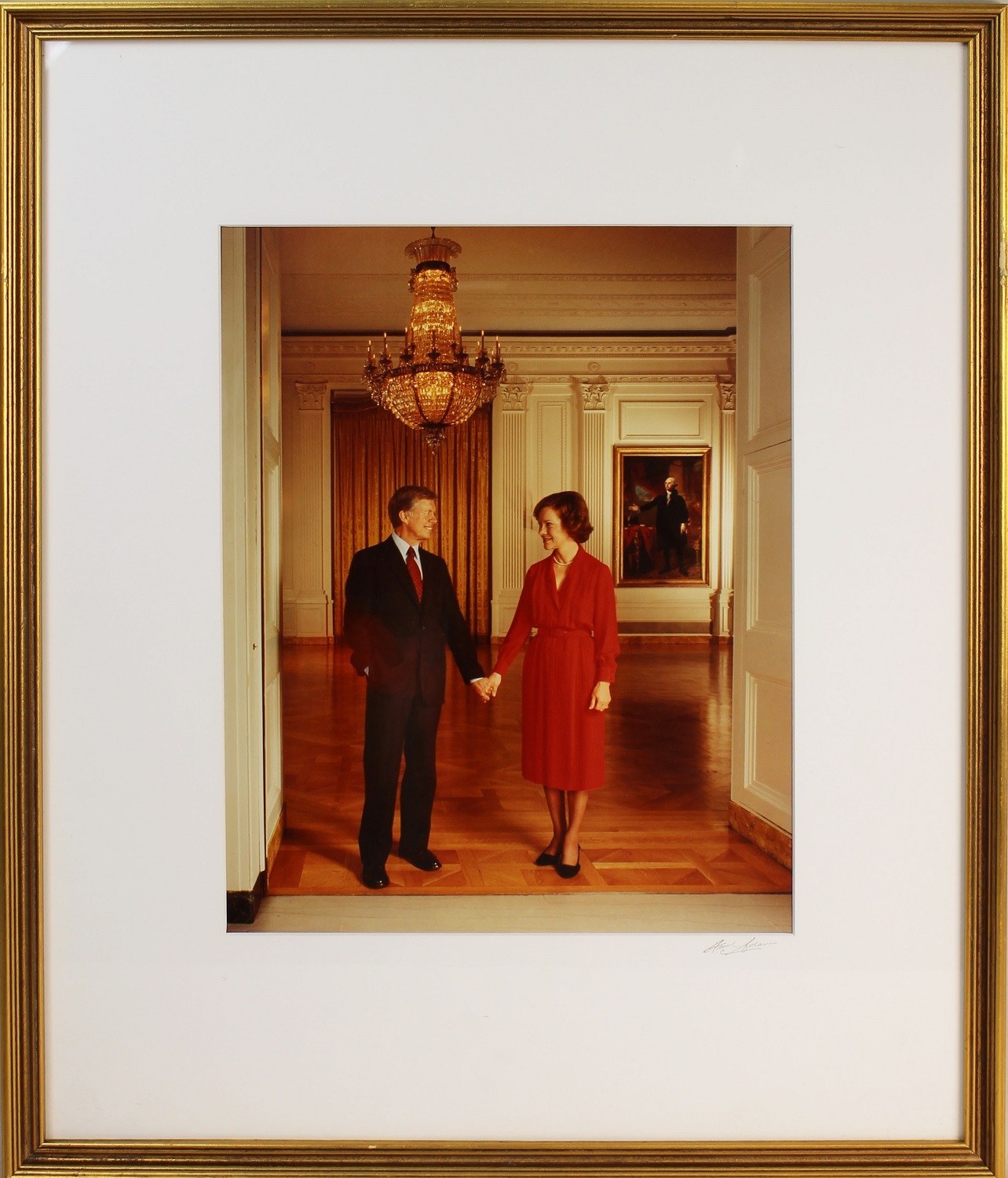