Monolith, The Face of Half Dome 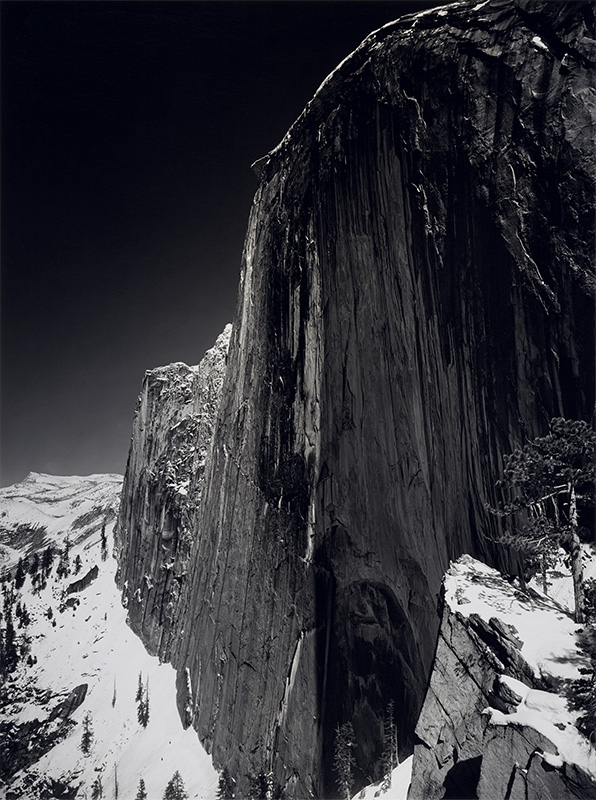 On the chilly spring morning of April 10th, 1927, Ansel Adams set out along Yosemite’s LeConte Gully to capture an image of the striking sheer face of Half Dome, one of Yosemite National Park’s most iconic natural features. Though Ansel knew the route well, having spent four teenage summers as the keeper of the Sierra Club’s nearby lodge in Yosemite Valley, his companions—his fiancée Virginia Best and three close friends, including his lifetime friend and fellow wilderness photographer Cedric Wright—picked carefully along the steep gully in the icy shadow of nearby Grizzly Peak.

This was not Ansel’s first journey to photograph Half Dome. In fact, nearly a decade earlier, a 14-year-old Ansel had visited this very spot on a family trip to Yosemite. Eager to experiment with his brand-new Kodak Brownie camera, young Ansel snapped several pictures of Half Dome, including one upside-down image, his favorite, taken accidentally as he fell off a stump.

As the 25 year-old Ansel hiked, he was in the midst of personal and professional upheaval. An accomplished pianist with a passion for photography, Ansel had only recently realized that his photographic skills dwarfed his musical ones, forcing him to abandon his dream of professional musicianship. His life’s work lay ahead of him, farther up the trail.

When the group reached the Diving Board, a steep outcropping more than 3,500 feet above Yosemite Valley, Ansel knew this was the perfect vista from which to capture Half Dome’s sheer face. The photograph he made, “Monolith, the Face of Half Dome,” shows the mountain rising from an ink-black sky, its face illuminated by a dazzling midday sun just out of frame. Though Ansel initially made an exposure using a yellow filter, he immediately swapped that for a dark red filter, which darkened the sky and produced the deep shadows and bright light we recognize in the final image. It was a startling expression of emotion and drama from the young photographer, and its technical excellence and artistic mastery would soon launch Adams’ career as one of the finest commercial and fine-art photographers of the 20th century.

Today, the image stands as not only one of Adams’ finest works, but as a lasting and iconic depiction of one of the most unique spots in the American wilderness.

Ansel Adams Climbing to the Diving Board, Half Dome, Yosemite National Park from The Ansel Adams Gallery on Vimeo.