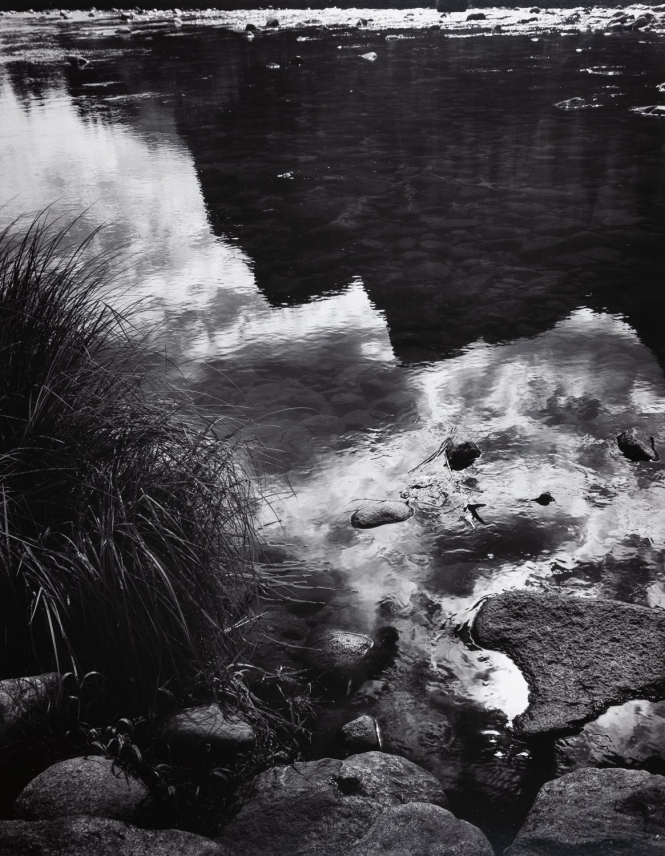 When you imagine Ansel Adams setting up to take a photograph, what do you see? Perhaps you’re envisioning Cedric Wright’s iconic image of Ansel standing atop his car to photograph Yosemite National Park in 1942. Or perhaps your mind’s eye visualizes him peering out over the Diving Board, a sheer outcropping 3,500 feet above Yosemite Valley, to capture the perfect shot of Half Dome. No matter how you picture Adams at his work, you’re probably not picturing a Polaroid instant camera—yes, the one you had in the 80’s—in his hands. Given what you may have heard about Ansel’s favored photographic equipment, it may surprise you to know that Adams’ Reflection, Merced River was created as perhaps one of the earliest Polaroids in history.

Around 1962 or 1963, according to the stamp on this print’s reverse, Ansel created this image of the Merced River as seen from the Gates of the Valley, near the western end of Yosemite National Park. Nestled among the banks of the Merced, this unique viewpoint provides a glorious look at both El Capitan on the left and Bridalveil Fall on the right, as well as a peek at Sentinel Rock in the background. No wonder it’s often referred to by park visitors as simply the “Valley View.” When Ansel made this image, he did so using a standard 4” x 5” view camera, one of the stalwarts in his photographic repertoire. But joining this familiar camera was a new player—Polaroid’s P/55 Land film, a black-and-white film that, after being exposed, could be peeled apart to yield both a photographic negative and a small positive image. In other words, the film produced both the negative that was used to print this image and a tiny, nearly instant photograph, surrounded on all sides by a white border—something we know today as simply a “Polaroid.”

In addition to Ansel’s use of this exciting new development in photographic technology, this image is remarkable for its compositional quality. Though numerous photographs in Ansel’s catalog feature reflections, very few feature a reflection as the focal point of the composition. Seen through the rippling waters of the Merced, the cliffs by Bridalveil Fall provide an ominous, inky-black contrast to the bright sun dazzling the river. It’s perhaps no mistake that Ansel chose to use Polaroid’s P/55 film for this image, as it aptly conveys the duality of the positive and negative images captured by exposing the peel-apart film. The composition is a strangely intimate one, as its closeness to the water’s surface makes it easy to imagine Ansel kneeling or crawling along the stones of the riverbank in his effort to make the perfect shot.

Throughout his life, Ansel Adams viewed his photography as a vessel for his conservationist efforts. He deeply loved the experience of being among America’s wild places, and used the sales of his photography to inspire a nation and the world to feel the same. Looking at the reflection of the cliffs depicted in this image, it’s hard not to wonder if Ansel saw his work as a form of reflection—an effort to capture and magnify the majesty of the wilderness he so loved. Perhaps this image was a sort of self-portrait, produced in Ansel’s own unique way, an image of the self from a man whose spirit was at home among the mountains and rivers of Yosemite Valley.