FEATURED STORY:, Story Behind the Image

The twisting cascade of Nevada Fall is an impressive sight for any visitor to Yosemite National Park. Plunging 594 feet to the boulders below, the white waters of the Merced River are dazzling year-round. But in the springtime, when the river is swollen and the fall is at its fullest, the forceful spray at the bottom produces a rolling cloud of mist that perfumes the canyon for more than half a mile. Unlike Yosemite Fall and Bridalveil Fall, the other jewels in the park’s crown of dramatic waterfalls, Nevada Fall can’t be viewed by car. To catch the view from the top or cool off with the spray and foam of the basin below, visitors must hike—a moderate trip of about three miles along the aptly-named Mist Trail—past the roaring Vernal Fall, Yosemite’s most powerful waterfall. 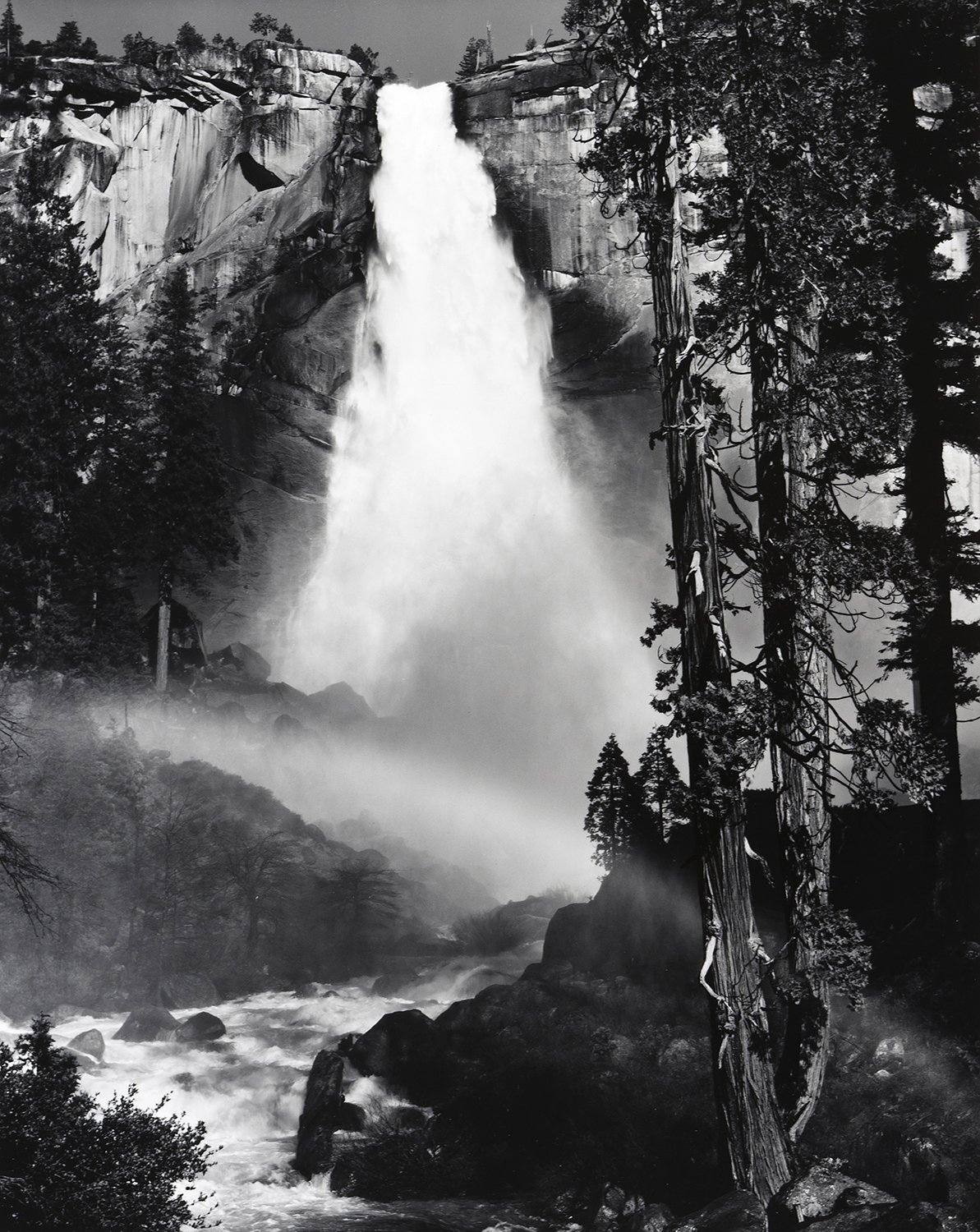 When Ansel Adams set out to photograph Nevada Fall in the spring of 1947, the Mist Trail was an obvious no-go. The trail, so named for the heavy mists that roll off Vernal Fall, would be impossible to travail without soaking his camera equipment. So, he opted for the rather unglamorous horse trail, an access road with little shade, dry, hot, and slow-going as he walked with his heavy equipment in the noontime sun.

The purpose of Ansel’s trip was not just to catch a glimpse of the fall at its most dramatic, but to capture on film a rarer sight. At just the right time of day in spring, the sunlight refracts through the spray, creating a rainbow that cuts a beautiful line across the base of Nevada Fall. Ansel had recently been hired to test a new kind of Kodak color film, Ektachrome, which had been created in the hopes of allowing professionals and amateurs alike to develop their own color photographs. To demonstrate the vivid colors of the new film, Eastman Kodak (as the firm was known at the time) asked him to take several pictures of rainbows to use in promotional materials. 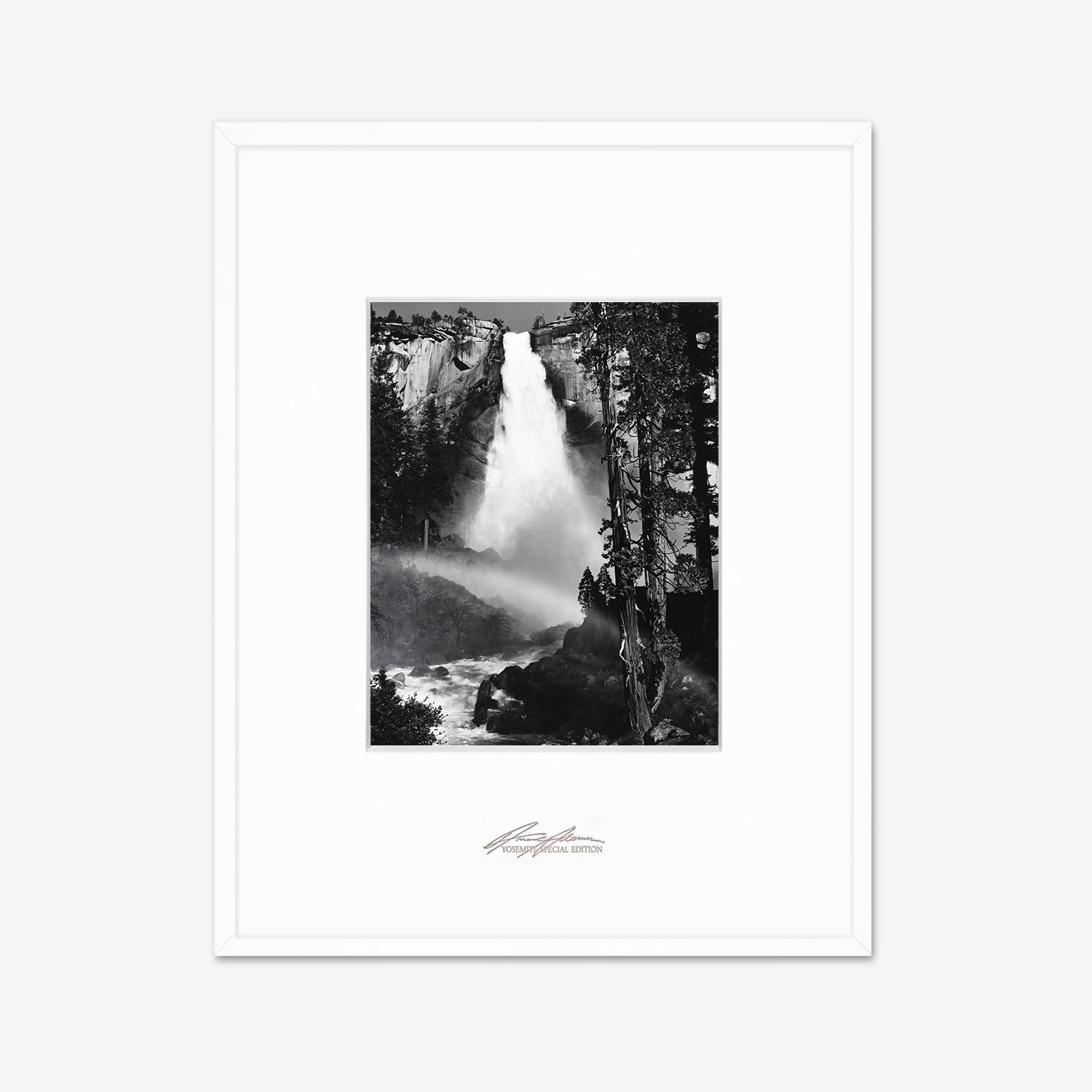 Having reached his vantage point with plenty of time to spare before the rainbow would appear, Ansel had several hours to navigate the difficult terrain as he worked to visualize the photograph he would make. As he describes in his book Examples: The Making of 40 Photographs,

“I had the time to engage in a protracted ballet with the tripod—forward, sideways, backward, and raising and lowering. All showed important changes in the relation of the branches of nearby trees to the waterfall and cliffs… The tripod was set up in a jumble of rocks, and changing its position—even slightly—was arduous.”

To make matters worse, while Ansel danced with his unwieldy partner, he had to constantly work to keep the camera dry, as the heavy mists blew continually from the nearby fall. All of these challenges meant that Ansel would have only a few moments to make his photograph when the time came—or risk getting both the camera and the photographer soaking wet.

When the time came, he first made a color photograph. As he lamented in Examples, what he didn’t know then was that the film would, alas, end up faded and unusable over time. To make the black and white exposure you see here, he worked to capture both the texture of the waterfall and the subtlety in the shadows of the nearby trees. This juxtaposition—the brilliance of the water and the depth of the shadows—is what makes this image so remarkable. As Ansel himself put it: “a choice bit of Chaos organized into some kind of expressive Order.” Thinking of the tumultuous circumstances—the thundering water, the blowing mist, the rocky terrain—of this remarkable image’s creation, it’s easy to understand why.

By Nicky Guerreiro, Creative Writer for The Ansel Adams Gallery