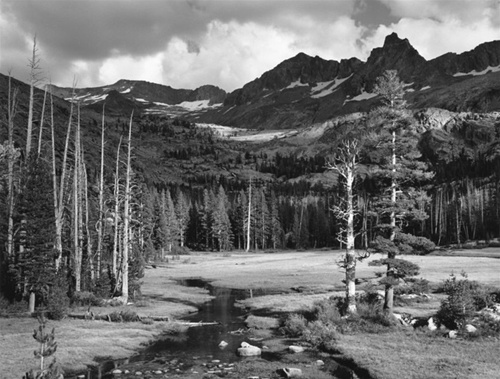 Ansel Adams made this image with a 3 1/4″ x 4 1/4″ Zeiss Jewel view camera. Precisely when he made the image is debatable; some evidence points to 1943, but it may have been on a pack trip in September 1938 with Georgia O’Keeffe and David McAlpin.

The Lyell Fork of the Merced River with its high, remote peaks and sapphire necklace of lakes was among Adams’ favorite areas in Yosemite . In 1934, he led a Sierra Club outing to the Lyell Fork and the group climbed the then unnamed peak Adams called the Tower in Lyell Fork. Around the campfire that evening, the group agreed that the peak should bear Adams ‘ name. However, the U.S. Geological Survey does not permit naming features for living individuals, so the peak did not officially become Mt. Ansel Adams until 1985, a year and one day after his death.

The peak is not the only place name in the Sierra Nevada honoring Adams . After his death, the California Wilderness Act championed by California Senators Alan Cranston and Pete Wilson enlarged the Minarets Wilderness Area to its present 231,005-acre size and renamed it the Ansel Adams Wilderness Area. The act protected the core of the high sierra that Adams so loved, establishing the contiguous wilderness areas of Kings Canyon , John Muir, Yosemite , and Ansel Adams.

“Mt. Ansel Adams” appears in Yosemite, Our National Parks, and Yosemite and the Range of Light .