The mission of our highly-trained instructors is to guide you through the fundamentals of learning all aspects of your camera and expanding your visual literacy. We want you to discover, appreciate, protect and support this amazing place that we call home. Take a walk with us today to explore the wonders of Yosemite National Park.

Brittany Colt first found her passion for photography at age ten while on a family vacation in the Olympic National Forest located in the state of Washington. Her passion for the art form grew exponentially, along with developing a strong desire to capture as many beautiful moments on this earth as possible.

Brittany’s creative journey began by photographing landscapes and continued further into the applications of portraiture and wedding photography. This led to her establishing a photography company in 2012, while also working in the Film Industry in Portland, Oregon. In 2016, Brittany started a formal degree program in Graphic Design. These combined experiences in Graphic Design and the Film Industry helped mold and influence her attention towards light, color and composition in her work.

In 2018 Brittany developed an additional interest in teaching photography, and started working as a Staff Photographer for The Ansel Adams Gallery. Brittany loves to challenge her students and expand their minds, not only technically, but creatively as well.

A native Californian, Christine White Loberg, developed a love for photography at age 13, when asked to photograph her dad as Santa Claus for one of the local malls. After high school she took photography classes at Cal State Fullerton to expand her technical skills, attended Brooks Photography College and took additional classes from the Main Photography School which is sponsored by Kodak.

Christine has worked in photography stores, photo studios and photo labs to increase her photography knowledge. Developing a love for nature, she became involved with The Sierra Club, making frequent visits to Yosemite. It was during one of these visits that she met Ansel Adams, and then in 1985 decided to accept a job working as a lab technician in Yosemite Valley. Christine is our most senior staff photographer having worked for The Ansel Adams Gallery for many years while also working as a seasonal Ranger for the interpretive division in Yosemite National Park.

Christine has also worked and taught for The Yosemite Conservancy, Kodak Corporation, Yosemite Park and Curry Co., The Sierra Club, Vision Academy of the Arts, YMCA, Yosemite High School, Road Scholar, and Parks in Focus. Having raised her sons in Yosemite, she instilled in them a love of nature and a zeal to protect it for the next generation.Tremendously passionate about photography and nature, Christine has made it her mission and life-long goal to inspire and teach the next generation of nature photographers.

Pro Tip: Keep it simple. Control, Simplicity and Placement for your subject matter. 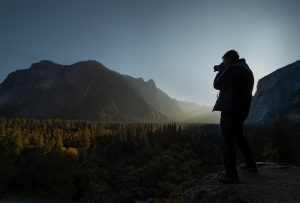 Creativity and the art manifested through it are necessities of life.

We recognize the value from the teachings and heritage of the art making presented by earlier communities. In the 1500’s, Giorgio Vasari formally promoted that the story of art is one of progress – where each artist is to learn from those who came before.

I believe Ansel Adams influenced an understanding that the artistic integrity in photography is one to be passed along and not held selectively. In part, Adams’ legacy was the development of a genuine collaboration and creative collective. These unifying ideas must endure today.

My journey into creativity has been a life’s passion. I developed my advanced technical proficiency through commercial photography and my teaching abilities as a university professor. And still, I struggle to explain the creative origin of my photography.

The natural gesture of Yosemite National Park offers me an emotional and intellectual grounding. And through my photography teaching and guiding work at The Ansel Adams Gallery, I continue to learn the joy of sharing and expressing the creative enlightenments that are bestowed by this natural environment.