Our gallery is excited to present an ethereal body of work by multimedia artist Martino Hoss, an artist with a deep and rich tie to Yosemite National Park. In an interview with our gallery, Martino shares stories of his greatest inspiration—his grandmother, pivotal moments that informed his artistic career, and the essence of Yosemite he is able to capture in the luminous medium of pastel on copper. 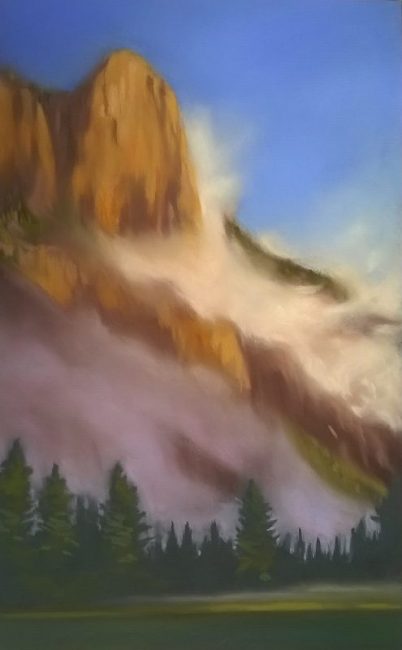 What drove you to be an artist?

How did your grandmother influence you to become an artist?

MH: My grandmother, Della Taylor Hoss, lived in Palo Alto and when I was a small child we used to take walks [there]. We would pick up seed pods and stuff like that and bring them back to her studio, and she would draw. She had a little place [in her house] called the ”creative oasis” and it was a very mysterious place above the garage. I used to love to go up there and watch her work.

Ultimately how she influenced my work was [with] the first print that I ever pulled which was a serigraph. [It] was silkscreen. I did it in my grandmother’s studio and I could only fit 30 prints there to dry. That became my edition size for silkscreens. I’ve done about 45 editions over the years. The way she influenced me was her discipline and dedication to her craft, and that she did art until she died when she was 96 years old. 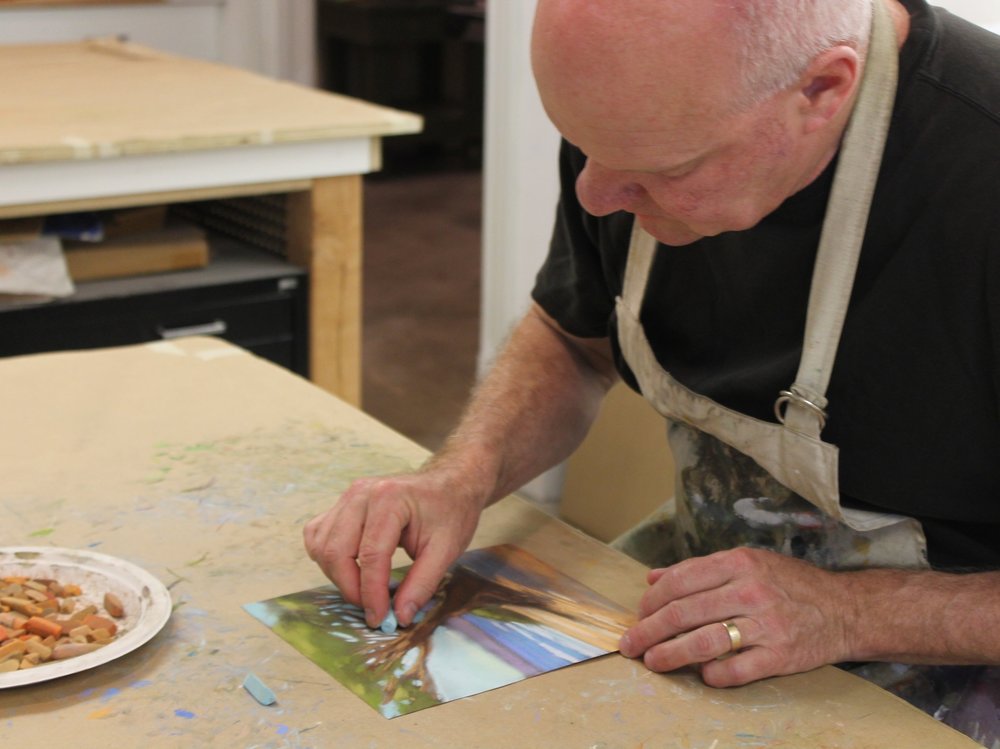 Martino Hoss working with pastel on copper in his studio 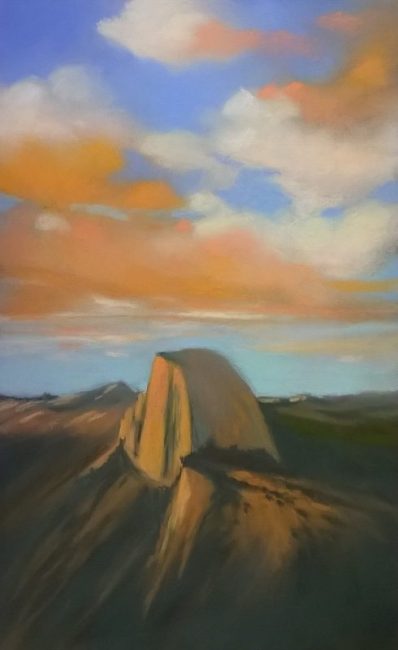 Did growing up in a family with such strong ties to Yosmeite and the Sierra have an influence on your art?

MH: Yes, growing up and coming to Yosemite definitely influenced my artwork. As a young child, we would pretty much come up every year, whether for the Bracebridge Dinner where my father one year was the Visiting Squire, or floating down the Merced, or just hiking around in the valley. Then as I got older, [hiking] up into the high country…just having that deep connection. I draw upon it now when I do work. In doing this show, there are certain memories I have in Tuolumne Meadows or in the Valley as a small child, in all seasons. I remember winters when it snowed and there was 30 feet of snow in the valley and we stayed in Yosemite Lodge… And the fact that I’m a landscape artist and that Yosemite is one of the more beautiful places in the world…it definitely influenced me. 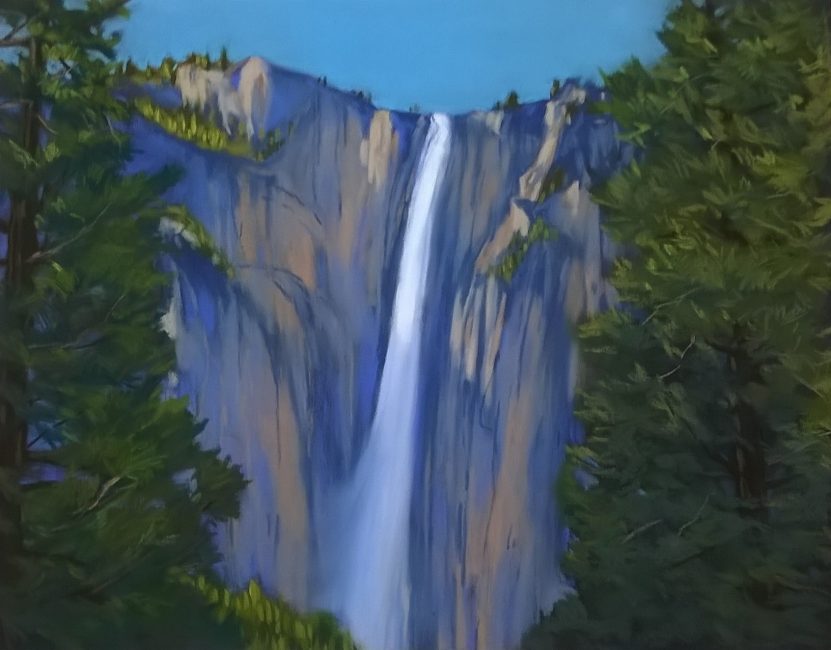 What was it like growing up in a family with such a rich history in Yosemite?

MH: I think growing up in a family that had an incredibly rich history with Yosemite was very unique from the fact that my grandparents worked here, my parents worked here, and we did too. My grandparents [grew] up with Virginia and Ansel, and then my father [was] best friends with Mike Adams until my father passed away last year. And also growing up with Mike and Jeannie [Adams]. I’ve known them throughout my life, and Jeannie…gave me a lot of support. I could always go to her with ideas and she was always helpful with inspiration and a lot of things about Yosemite.

You’ve made inroads with several different mediums. How has that evolved and why have you settled on soft pastel and copper at the current time?

MH: I have developed a number of different mediums. I like to work in different media. I work with the printmaking techniques and wood blocks and painting and the pastels and copper. Every time I approach a new medium—like with silkscreens and serigraphs—I try to do something that hasn’t been done before. When I did the serigraphs I was my own master printer. I made my own screens. They were all printed by hand. I did those for about 25 years, and I did about 45 different editions of landscapes, west coast.

And then there was a class at the Art Center College of Design called media experimentation and it taught us how to use incongruous materials. I decided I wanted to do one-of-a-kind pieces and I wanted them to be original—to do something that nobody had done before. So, I had some copper in my studio and some chalk pastels and I started to experiment with the chalk pastel on the copper and also on tin and brass and canvas and different materials. I chose the copper due to its luminosity and it is just a beautiful metal. I thought for this show, pastels on copper would really be able to capture the light and atmosphere of Yosemite.

How does Yosemite translate visually onto copper with pastel?

MH: I think that chalk pastels on copper really work well visually as far as being able to translate Yosemite Valley and the park. The luminosity of the copper reflects an inner light. There’s something about certain times of day…when you look at the granite when the sun is going down on El Cap…it looks like it’s lit from within. Or a waterfall, the light and the mist…there is an inner light. I thought that the pastel and copper medium would be an excellent choice. [When I started] this show, it actually surpassed my expectations of the pieces that I was able to create. 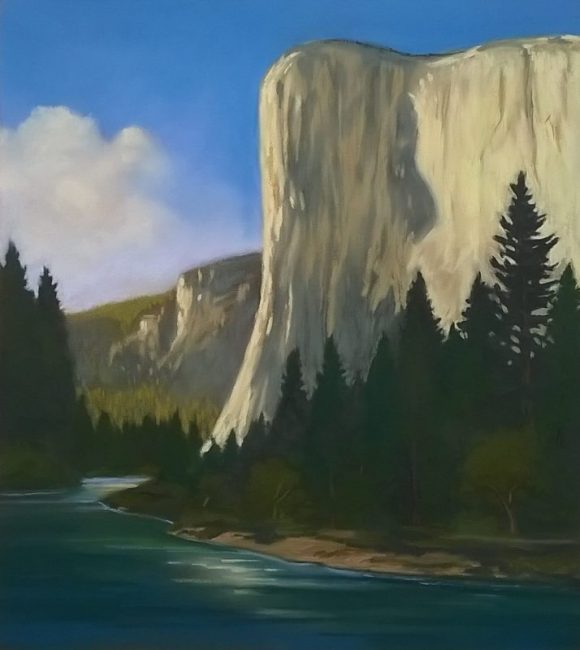 What are the advantages over other mediums?

MH: The advantage of the chalk pastel medium is that [it allows me to] do the pieces with just my hands and my fingers. I don’t use any brushes…there is a real immediacy to them. There’s a freshness, there’s a purity. You can’t overwork them. If you overwork them, the pastels stop sticking and you have to scrape it off and start over again. Going into [a] particular piece, you have to have a clear vision of what you want it to be and then you create it very directly [from that vision].

What’s your favorite aspect of the art making process?

MH: One of my favorite aspects of making art is a sense of discovery. I love the unexpected. I’ll start a piece and I’ll have an idea but at some point in the process, they become what they want to be. They become alive. They, to a certain degree, will show you how they want to be finished. And you need to be open. You need to listen to that. And I love that, and feel very blessed to be able to create. 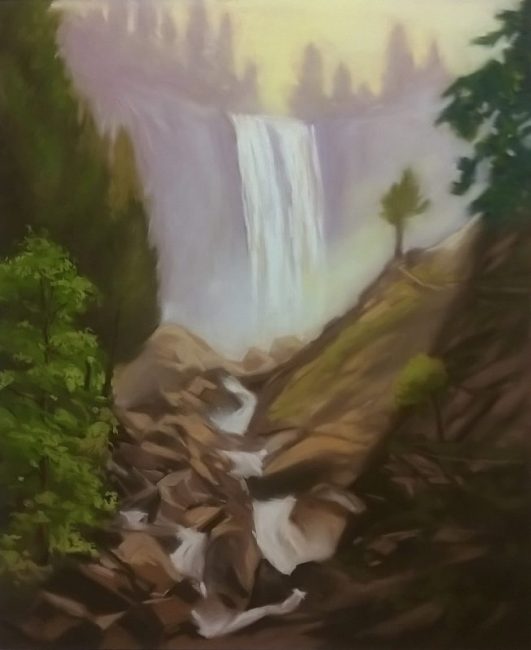 What’s your favorite part about making art in Yosemite?

Explore the entire collection of Martino Hoss’ pastels on copper.