Light from Dark: The Alternative Process Behind “The Black Sun”

The Ansel Adams Gallery is pleased to offer “The Black Sun, Tungsten Hills,” a phenomenal example of Ansel’s personal work and discovery in solarization.

Ansel Adams was trekking along a small stream in Owens Valley, California, when he first pictured the sun as a point of darkness. “In this instance I recognized the potential for using an unconventional process and I visualized the outcome much as it appears here…” he wrote in Examples, The Making of 40 Photographs. That day he saw the sun not as it appeared to his eyes but as the camera might see it: a dark disk hanging above shadowy hills.

The Black Sun is considered the earliest and most famous example of overexposure solarization, a reversal effect caused by longer-than-normal exposure time. 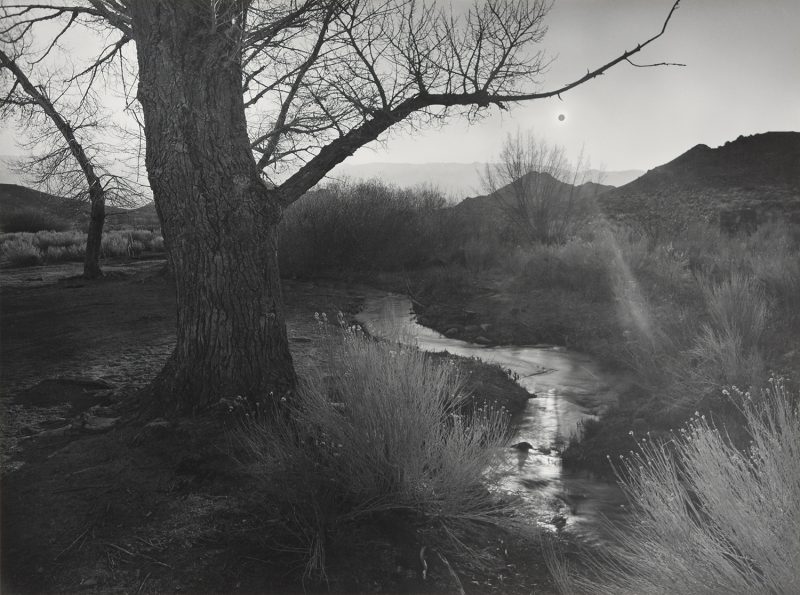 So, how does it work?

Silver halide crystals are the magic ingredient in film. They begin to transform the moment light enters the camera. The more light there is, the more metallic and opaque the crystals become. These places of darkness on a film negative become highlights in the finished print.

Ansel knew, however, that his film stock had a peculiar limitation, common among films of the time. When the silver crystals absorbed all the light they could hold but continued to be bombarded with more light, a destructive process would set in. Inside the camera, the latent image would begin to disintegrate. The brightest highlights on the film would turn from opaque to clear. It would be like the sun never touched them at all. In other words, overexposure was his trick to darkening the sun.

“The implication in this photograph is that wherever there is significant shadow value there is light— otherwise we have nothingness” said Ansel.

From his vantage point along the stream, Ansel set up his 4×5 Linhof camera and took two identical exposures. He lingered as light spilled into the camera. How long would it take for the dark star to burn its image onto film?

Back in the darkroom, the experiment continued. He processed the first piece of film with traditional developer and scrutinized the tones. Close, but not quite right. In went the second exposure, the negative that would become The Black Sun. This time he followed an alternative process known as compensating development. For this technique, the developer is watered-down and the film left floating in the mixture longer than usual, allowing more details to emerge from the shadows.

“It was gratifying to see both negatives as experiments and one, The Black Sun, as a striking surrealistic image. It was proof that the subject may prompt ideas, ideas crave visualizations, and craft makes their realization possible.”

This photograph is in excellent condition and includes a Certificate of Authenticity from The Ansel Adams Gallery. Call 888-238-9244 or email us at originals@anseladams.com for more information about this photograph or other Ansel Adams Original Photographs.