Half Dome from Glacier Point Few sights speak to the ruggedness and wildness of the American West like Yosemite National Park’s Half Dome from Glacier Point. Easily one of the park’s most famous landmarks, Half Dome rises some 4,737 feet above Yosemite Valley. The captivating sight of Half Dome attracts 50,000 intrepid hikers each year, each looking to summit the iconic peak.

From the valley floor, Half Dome’s wide cliff face appears like the sail of a ship. But it’s the view from nearby Glacier Point—the view that Ansel Adams captured in his iconic 1947 image Half Dome from Glacier Point—that makes it clear where Half Dome got its name. On three sides, the mountain appears round and smooth. But the fourth side drops off into a sheer cliff, giving the monument the appearance of being cut in half.

However, as journalist Annette McGivney notes, Half Dome “never sported a matching half in front of the sheer cliff face.” In fact, Half Dome formed millions of years ago when glaciers exposed a large vertical crack in the granite, carrying away about 20 percent of the formation. (Of course, “eighty-percent dome” doesn’t have quite the same ring to it.)

Adams was particularly fond of the view from Glacier Point, and would often bring first-time visitors to ponder and savor the Sierra from this lofty granite prow. He felt that the spectacular vista offered a perfect encapsulation of the ruggedness and the grandeur of Yosemite. And indeed, a number of his famous photographs were captured here, including 1927’s From Glacier Point, and Autumn Moon, from Glacier Point, made in 1948.

But of all the photographs Adams took from this stunning location, 1947’s Half Dome from Glacier Point is among the most arresting. The image, produced using a 5×7 camera on Kodak Safety Film (though Adams’ notes list the negative—incorrectly—as Isopan film), emphasizes the sky above the mountain as much as the mountain itself.

Indeed, over half the composition is devoted to the sky, which rolls brooding and animated over the dome. Its dark and dramatic appearance is amplified by Adams’ use of a #12 filter, which darkened the bluish hues of the sky and clouds. In stark contrast, the brightly illuminated cliff face juts upwards like the edge of a knife, giving the image an almost three-dimensional quality.

This contrast is no accident. Alan Ross, Adams’s photographic assistant to whom Ansel entrusted the printing of his Yosemite Special Edition Prints, notes that this attribute is achieved not only by the composition of the image but also through the printing process. By manipulating the exposure time across different parts of the image, Ross is able to amplify the range of tones even further, creating the striking print we see today. Considering the role printing plays in the development of such an iconic image, Ross recalls one of Adams’s favorite turns of phrase:

“The negative is the score, and the print is the performance.” 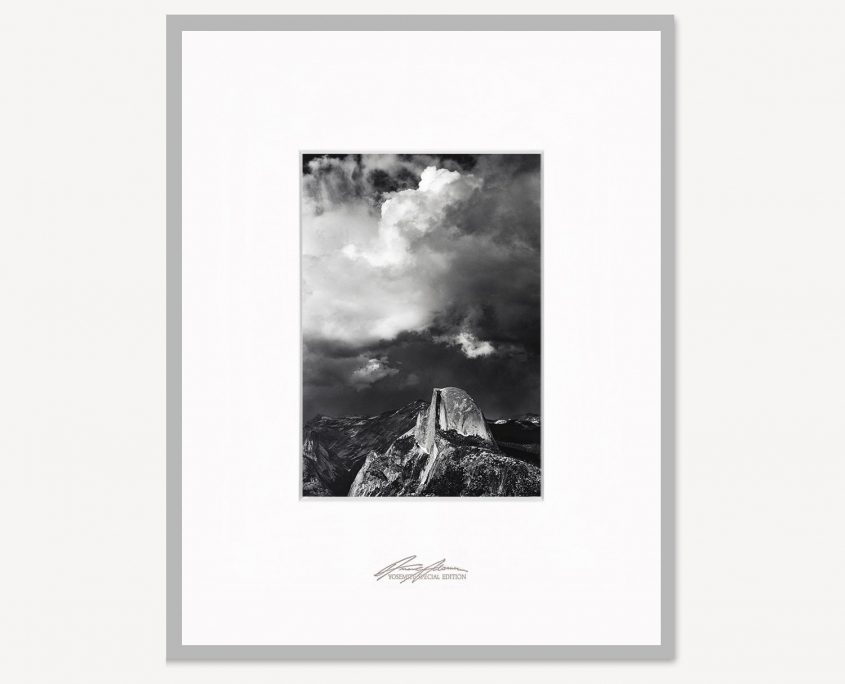