The Story Behind the Image | “Chinese Baptist Kindergarten”

Ansel Adams, Family, and Friends, Story Behind the Image
Today, it’s hard to imagine that one of America’s most celebrated photographers ever struggled to find work shooting photographs. But in the beginning, Ansel Adams was, like most young photographers, unknown, and in order to support himself as a photographer, he took on work as a commercial photographer. 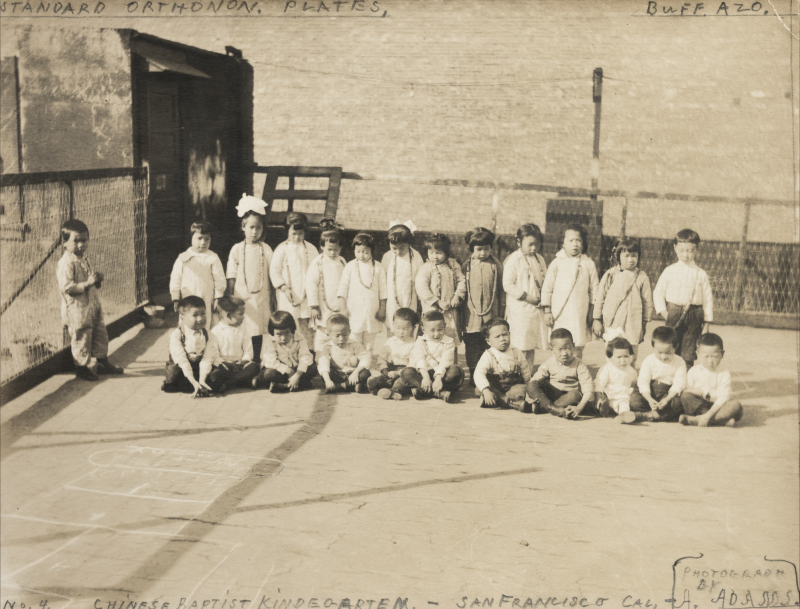 But, bills (as Ansel described as “the wolf at the door”) needed paying, and his more artistic work would, at least in the early days, need to be supported by commercial endeavors. As Ansel writes in his autobiography, “Our bank account would dwindle to a distressing level and I would grow deeply concerned, then, usually at the financial brink, with creditors gathering, the phone would ring and an assignment would present itself. This would carry us for another month or so.”

One of his first paying clients was his next-door neighbor, Miss Lavolier, who taught at the Baptist Chinese Grammar School in downtown San Francisco. It was in 1920 that she asked Ansel if he could photograph her kindergarten class. It was his first professional assignment.

Ansel prepared meticulously. He arrived early, set up his camera, composed the picture, and—importantly—organized his flash equipment. This was, of course, well before the invention of the flashbulb, so Ansel had to use an array of significantly more dangerous equipment: a flash gun, black powder cap detonators, and a supply of magnesium flash powder. The powder came in three different capsules, small, medium and large.

Though Ansel had learned how to use the technology of artificial lighting, he was not particularly experienced, as he greatly preferred using natural light. So when the instructions indicated that one medium and one small capsule of flash powder were to be used, he mistakenly used four large capsules—the equivalent of sixteen small ones.

He gathered the children together, got their attention and fired the charge and the shutter simultaneously. He writes “The light was apocalyptic. There was a thunderous PPFFFUFFF!! and my arm was firmly knocked down.”

MIss L. threw open the window to clear the smoke, and soon attracted the blaring sirens of San Francisco’s finest. The children had vanished, hiding beneath their desks covered in a dusting of powder. Fortunately none were hurt, but after the initial shock wore off, the crying began.

Michael Adams recalls that his father told the story many times. “He was always embarrassed that he’d allowed it to happen, and, of course, thankful no one was hurt.”

In the end, Adams led the class outside, photographing them—like so much of his later work—in natural light.

By Ethan Simon, Creative Writer for The Ansel Adams Gallery